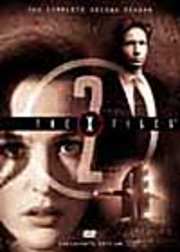 Synopsis:
The complete second season of the Sci-Fi series.

Well, now that I was crazy enough to invest a lots of money to these X-Files dvd collector`s edition boxsets, it`s time to check out was is worth it...I bought three of my favourite seasons, including 2nd, 3rd and 4th season. Actually I had money available only for three boxsets and the hardest part was to choose between 1st and 2nd season. Finally the 2nd season seemed a slightly better one. There`s time to buy and review 1st Season later on. The X-Files became almost instantly my favourite serie of alltime. After seeing the Pilot, Eugene Victor Tooms episodes (Squeeze & Tooms), Ice, Darkness Falls, The Erlenmeyer Flask and many others it made an unforgetable impression to me. The second season could only get better and it did, straight from the beginning. So, we`ll get 25 episodes (approx.1,100 minutes) of enjoyable X-Files on this 7 disc dvd boxset, plus 24 page booklet and some special features. I`m not going to repeat the words of Rich Goodman about the episodes, so I`ll just review each disc briefly.

Disc 1: The beginning of the second season starts with strong episodes and we`ll get four good ones in this disc. Including two excellent episodes "Little Green Men" and "Sleepless" (introduction of my favourite character Alex Krycek). The popular "Monster Of The Week" episode "The Host", which is ok and "Blood", where we`re going to see people going nuts by the machines.

Disc 2: The season gets even better, when the "abducted" Duane Barry is introduced. "Duane Barry" and "Ascension" are certainly one of the most important episodes in the history of the X-Files and also one of my favourite episodes ever. After two spectacular episodes we`re going down to the bottom with one the worst episodes of season 2 called "3". Luckily the next episode "One Breath" gets us back to the world of mythology and conspiracy.

Disc 3: When we come closer to the middle of the season 2 the quality drops a little bit. "Firewalker" was the only episode that I liked on 3rd disc, even it`s still a typical episode, maybe because it`s so disgusting. "Red Museum" is an average episode, "Excelsius Dei" (shouldn`t it be Excelsis Dei) is a real stinker about stupid magic mushrooms and ghosts. Then there`s a episode called Aubrey" which is quite interesting in the beginning, but
the ending is a bit flat.

Disc 4: Perhaps the best disc from this season and we`re going to see some scary stuff. "Irresistible" is an excellent episode about a man called Donnie Pfaster, who`s collecting pieces from dead bodies (the subject & theme of this episode is quite sick). "Die Hand Die Verletzt" is one of the most scariest episodes from this season and also one of my favourites. Fresh Bones isn`t nothing more than just a average episode, even the voodoo stuff might sound intriging. The two-parter "Colony" and "End Game" are one of my alltime favourite episodes in the history of the X-Files. Bounty hunter (Brian Thompson, who actually looks like some kinda alien) comes to chace the clones with his "icepick". David Duchovny being with the writers gived certainly some new light to the serie. This two-parter has just everything you could wish for: interesting story, conspiracy, aliens, great acting, thrilling action, good Mark Snow music and so on.

Disc 5: The "End Game" is one of the most memorable episodes for me, specially that submarine scene, I was so excited to see it again. Truly the highlight point of the season 2. Just as we had the thrilling feeling of the two-parter, the next episode "Fearful Symmetry" makes you wonder if it`s the same serie at all. The worst episode from 2nd season, no doubt. "Dod Kalm" surely seems nowdays quite funny, specially the make-up and the story is weak (what story?) but when it came from the tv first time, it felt like nice episode (well, that was then...). "Humbug" is one of the fan classics, but for me it`s just something funny that goes over my head.

Disc 6: We start the 6th disc with boring episode called "The Calusari", it`s about rituals, chanting and some "annoying yelling" evil boy, reminds about Exorcist. The next episode "F.Emasculata" is much better, actually one of the best from 2nd season. Some sort of contagious "boil" disease gets on loose and the rest is history.
"Soft Light" is the next one and it`s a good episode about the achievements of science. There`s also revealed, how cruel X can be. WARNING:Don`t eat chicken, if you`re going to view the next episode "Our Town", it`s one of those episodes that makes you feel uncomfortable.

Disc 7: So 24 episodes behind and one more to go. Is it a good one? Well yeah, it`s one of the greatest episodes ever and my alltime favourite season finale called "Anasazi". It`s the 1st part from two others (The Blessing Way and Paper Clip) and it`s got everything you could wish for. Alex Krycek, C.S.M, aliens, mythology, drama and ext. I remember when this episode came from tv and TO BE CONTINUED appeared I was going crazy. I couldn`t wait to see the the next part. Damn, it was great back then, sure it still feels good to watch it from Dvd after these years, but you already know what`s going to happend. This 7th disc has also got the special features, "The truth behind season two", tv spots, deleted scenes and so on. Not a great amount of extras, but enough to make you satified. There were supposed to be dvd rom game, but I never found it...

Overall Opinion:
Great season, with eight excellent episodes "Little Green Men", "Sleepless", "Duane Barry", "Ascension", "One Breath", "Colony", "End Game" and "Anasazi". Many good stand alone episodes and three stinkers "3" & "Excelsius Dei" and "Fearful Symmetry". The video and audio quality are decent, but far from perfect. There`s some grain in dark scenes, but overall the picture quality is good enough for me. Dolby 2.0 audio is ok, but 5.1 would have been much better. Good Boxset, great serie, great quality time with the X-Files and certainly worth for your moneys, if you`re a fan.

Season 2 in my opinion is one of the greatest seasons, even though all of the seasons are brilliant. Season 2 has some good moments and some not so good moments. But Gillian and David excell in their roles as Mulder and Scully.
The picture is ok, but you can see a great difference whe you watch episodes on video. The sound is ok, the DD 2.0 is alright but 5.1 would have been better.
The extras are grate and give lots of insightful information about the season.
posted by verhoeven on 29/8/2002 16:40
8 / 10

Season two is the greatest eason of the X-Files, when the show was in it`s prime. Chris Carter has created a show that is truly great. David Duchovny is brilliant and Gillian Anderson
sexy as ever as Dana Scully. Every episode in this season is wildly entertaining and at all times retains some humour.

Only 2.0 i`m afraid, it would be nice if 5.1 was included or even a DTS track which would be fantastic!

The picture is ok, better than you`ll ever see it.

No commenatries which is a great shame, but there is a good selection of documentries. They are all very entertaining and it features interviews with nearly everything covered. Chris Carter gives his insight into a few selected episodes.
posted by the_film_king on 7/8/2003 20:11
7 / 10

X-Files Season 2. Hmmm...it`s a much better season than the first one in my opinion. I guess some die hard fans consider the 1st season to be the only best season and that the franchise start to get worse from this season.

Here`s the summary for each episode:

Little Green Men- After the X-Files is closed down, Mulder disappears somewhere. His trail leads Scully to some weird abandoned radio telescope in Puerto Rico.

The Host- A worm like creature that swarms about the sewers. Mr.X is introduced. A "successor" to Deep Throat.

Sleepless- A bunch of ex-soldiers are put in an experiment where they never sleep again. This is a crucial episode. Alex Krycek is introduced here and becomes Mulder`s new partner. Mulder doesn`t trust him(he`s right).

Duane Barry- Duane Barry, a schizo, holds several people hostage at a travel agency. Mulder and some other guy are disguised as medics after Duane shot one of the hostages. After taking down Duane, he is brought into hospital and escapes. He captures Scully.

Ascension- A follow up on Duane Barry. Mulder goes on a chase to find Duane. Mulder takes a guess that Duane is taking Scully to Sky Mountains. Krycek agrees to go but calls CSM(Cigarette Smoking Man. A member of this gang called "Syndicate". Krycek too is with the Syndicate) to keep note of their movements. Mulder takes the tram to the top of the mountain but Krycek kills the tram operator and stalls Mulder. Mulder gets out of the tram and tries to find a safe way out but Krycek turns back the tram hoping to kill Mulder but fails. By the time Mulder reached Duane, Scully has been abducted only to find her necklace in the boot of Duane`s car.

3- An episode without Scully due to Gillian Anderson being pregnant. Mulder investigates a bunch of murders caused by vampires. The X-Files is re-opened

One Breath- Scully returns back to earth in a coma. A man steals Scully`s blood sample and Mulder chases him. Mr.X kills that man.

Red Museum- A bunch of teenagers are abducted and found in a deranged state with "He is the one" or "She is the one" on their backs. A weird religious cult seem to be the blame for this.

Excelsius Dei- Wierd. Drugs and ghosts. What the hell? A nurse seem to be assaulted by some invisible force. Mulder and Scully go to a retirment home to investigate.

Aubrey- Some woman detective seems to be having disturbing dreams about a 50-year-old murder
spree. She sees a murderer in the mirror.

Irresistible- A man named Donnie Pfaster, has a fetish of capturing women and killing them. He takes their hair and nails as some trophy.

Fresh Bones- An episode with zombies.

Colony- This episode starts with Mulder who is being rushed into a hospital suffering from hypothermia. This is told in non-chronological order.

Fearful Symmetry- A weak episode. Elephants and tigers appear from no where as Mulder and Scully investigate a bunch of zoo abductions.

Humbug- A humourous episode. Mulder and Scully investigate a murder of a circus freak. Scully `eats` her first bug and a guy puts a nail through his heart.

The Calusari- An exorcist like episode. A boy seems to be in danger by his weird granny. Mulder and Scully investigate this `old-riddle`.

F Emasculata- A plague is on the outbreak in a prison. Scully is trapped in this epidemic and Mulder chases an escaped felon who`s infected with this plague.

Soft Light- A man that has the ability to kill people using his shadow.

Our Town- Mulder and Scully investigate disappearences in a remote Arkansas town only to find the folk are cannibals. Don`t expect Hannibal Lecter to reside here.

Extras- A short featurette on the making of season 2, 12 short interviews with Carter talking about his fav episodes. You get deleted scenes, SFX clips, behind-the-scenes clips, 9 "Behind-the-truth" spots from F/X and a handful of tv spots.