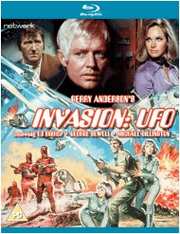 DVD
Journey to the Far Side of the Sun (aka Doppleganger)

DVD
The Protectors - The Complete Series

INVASION: UFO(PG) out on Blu-Ray

AHEAD of the release of UFO – The Complete Series later this year, Invasion: UFO (PG) from the legendary creator of Thunderbirds is available to buy on Blu-ray today (29 July 2016) exclusively through networkonair.com, RRP £14.99.

Specially made on videotape for syndication in Europe and America, this amalgamation of six episodes from Gerry Anderson's UFO has always looked and sounded below par - until now. Re-made in full widescreen from restored High Definition elements sourced from the original 35mm negatives, Invasion: UFO is presented here with both original mono and Dolby 5.1 soundtracks.

Earth's greatest fear becomes a reality when UFOs are finally confirmed - the aliens come from a dying planet millions of light years away, seeking human organs to repair their own decaying bodies. In a raging inter-galactic space-battle, top secret defence organisation SHADO attempts to save Earth from this alien terror.

Love UFO, with Gerry Anderson moving on to live actors instead of puppets. seems he never really like using puppets after all. I do not have all the episodes unfortunately, as picking them up one at a time over the years (three episodes per DVD), but it is a great si-fi British show, with fantastic vehicles, Moon base with dolly birds in mini skirts and secret Earth base with scantily clad more dolly birds, what more do you want LOL. Yep, the 80's had everything in this great si-fi series.
posted by bandicoot on 29/5/2020 01:57