DVD
Journey to the Far Side of the Sun (aka Doppleganger)

Article
They're back! Return of the Man from U.N.C.L.E.: The Fifteen Years Later Affair hits DVD in March

The Protectors - The Complete Series 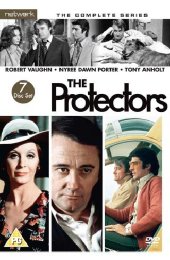 Synopsis:
Each of the world's major cities has its best detective agency, and each of these has its best agents; super-agents like The Protectors.The most sensitive, baffling, dangerous assignments are handled by this trio of adventurers with no equal among private eyes. In their nerve-tingling assignments, they function as a highly trained team, but they know that the next mission might mean death - and they live as if each moment were their last. Robert Vaughn stars as Harry Rule, the suave American who leads their operations and works from a London office; Nyree Dawn Porter is the elegant, Rome-based Contessa di Contini, and Tony Anholt is Paul Buchet, a French agent operating out of a Paris apartment.

Produced by Gerry Anderson and Reg Hill (Thunderbirds), this glossy, stylish series was one of ITC's most lavish and ambitious projects, boasting intriguing, action-packed storylines and location filming in some of Europe's most glamorous cities. John Thaw, Diana Quick, Stephanie Beacham, Peter Bowles, Patrick Troughton and George Baker are among the many stars making guest appearances, while Tony Christie sings the show's theme tune, Avenues and Alleyways - a UK Top 40 hit on its re-release in 2005. This 7-disc set comprises all 52 half-hour episodes, originally aired between 1972 and 1974.