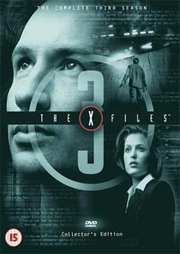 Synopsis:
The complete third season of `The X-Files` is beautifully presented in a fold-out digipack. This seven-disc set contains a wealth of special features, including a documentary, deleted scenes, commentaries and interviews with the man behind it all - Chris Carter. Of course, all X-Files fans know that the real reason for buying this box set is for the superb storylines that run through every episode.

With its third season, `The X-Files` matured from a cult hit to a global phenomenon, and was the most popular show in many countries outside America. Creator Chris Carter was able to expand the show`s mythology, and the 24 episodes in this set represent arguably the strongest of any `X-Files` season.

There are many two-part episodes here, introducing such X-Files classics as the alien black oil, the well-manicured man, the implant in Scully`s neck, the mysterious Agent X, and the shape-shifting Jeremiah Smith. However, the series also features great stand-alone episodes such as `Final Repose`, a bittersweet tale of foreseeing death, notable for its Emmy-winning performance from the great actor Peter Boyle.

The UK region 2 release of season 3 is let down by a few technical problems:

The audio and subtitle tracks are NOT switchable through the audio/subtitle tracks on your remote. You have to go through the menu. Also the intros on the disks are non-skippable.
This makes navigating the menus slow and frustrating.

This problem is not present on the UK release of the season 2 box set.

As the X-Files gets to season 3, it gets better.

Here`s the summary for each episode:

The Blessing Way- A follow-up to the last episode of season 2. Mulder`s is somewhere between life and death. His spirit goes through a Navajo healing ceremony and Deep Throat and Bill Mulder`s spirits visit Mulder`s spirit. Scully tries to find MJ documents but the Well-Manicured man gives her a warning.

Paper Clip- Follow-up the The Blessing Way. Mulder is return back to life. Mulder and Scully find their way to a mine in West Virginia where Mulder see a UFO take off and Scully see some aliens. Scully sees row and rows of cabinets containing secret files including her abduction.

D.P.O- Mulder and Scully investigate a teen who has the ability to control lighting and lightning.

Clyde Bruckman`s Final Response- A humourous episode:). Mulder and Scully are contacted by a insurance salesman that has the ability to predict how people will die.

The List- Mulder and Scully are investigating an exectuted man that swears he will seek vengeance from beyond the grave. His spirit kills specific people.

2Shy- Mulder and Scully investigate lonely, obesse women who are being contacted via the internet. This killer has the ability to suck the fat from women. A very gory episode.

The Walk- Mulder and Scully investigate a gulf war veteren who tried to kill himself but can`t. The investigation leads to a quadruple amputee

Oubliette- Mulder believes ther`s some psychic connection between Lucy Householder, who may have been captured in her childhood and recently captured girl. In my opinion, this is stolen from Silence of the Lambs due to because the kidnapper is like Jame Gumb aka Buffalo Bill who captures his victims and lock them in a confined space.

Nisei- Mulder and Scully investigate a salvage ship after Mulder receives a mail-order `alien` autopsy tape. Mulder ends up on a train that maybe carrying an alien.

731- A follow-up to Nisei. Mulder finds himself trapped in a train car with a bomb. X kills the assassin on-board with Mulder and manages to get him out before the train car explodes.

Revelations- Scully is the believer and Mulder is the sceptic. A killer or devil`s agent stalks his victim who display the stigmata. A weak episode.

War of the Coprophages- Mulder and Scully head off to Miller`s Grove based on a report that roaches are overrunning the town. Another humourous episode.

Syzygy- Mulder and Scully investigate a town where a satanic cult seems to take over a high school. Two friends maybe involved in this.

Piper Maru- A French salvage ship finds some WWII salvage and the diver is infected with an alien in the form of black oil. He passes it on to his wife and then Krycek. Skinner gets shot by an unknown man.

Apocrypha- Follow-up to Piper Maru. AD Skinner is shot by the same man that shot Scully`s sister. Mulder returns with Krycek, CSM`s agents chases them and it appears that Krycek will be stuck in a silo forever.

Pusher- A man who can kill people by suggesting plays cat and mouse with the FBI.

Teso Dos Bichos- This is the clichéd plot where a someone finds a wierd object, brings it home and people getting killed one by one.

Hell Money- Mulder and Scully inestigate some wierd cult where people hold a lottery in which the players wager parts of their body.

Jose Chung`s from Outer Space- Jose Chung, a famous writer interviews Scully in order to find out the truth about alien abductions. Another humourous episode.

Avatar- Skinner finds himself in a hotel lying next to a dead prostitute.

Quagmire- Mulder and Scully head off to Georgia after receiving a report of Loch Ness type monster.

Wetwire- Mulder and Scully investigate a series of Maryland homicides. It appears what in common with them is that they watch too much tv. A parent`s favourite to warn children about the dangers of watching to much tv. ;)

Talitha Cumi- Another cliffhanger episode. Jeremiah Smith, a guy who has the ability to heal the wounded. Mulder`s mom gets a stroke after meeting CSM. Scully is searching for the miracle man and Mulder looks into his families past and discovers a hidden secret.

Extras- I`m not too fond of the X-Files extras but it`s either that or nothing at all. First up, there`s a short 20 min documentary on the making of season 3.

Next there are 12 interviews with Carter, talking about his fav episodes. They are 90s each.

There are 17 Behind the Truth spots. I despise the info clips and I would prefer a few documentaries lasting an hour each. Quality is a priority, quantity ISN`T.

There are another handful of tv spots.