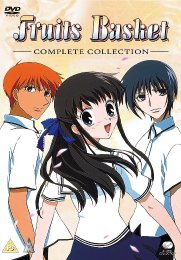 Synopsis:
Adapted from the phenomenally popular manga written and illustrated by Natsuki Takaya, the animated version of Fruits Basket has been charming and intriguing anime fans worldwide ever since its original Japanese television debut. Now, the complete anime series has been collected together on the four-disc DVD release Fruits Basket Complete Collection, which features all 26 episodes plus a generous helping of extra features including an interview with the series' director, Akitaro Daichi.

The Sohmas are a family cursed, the circumstances of which have led to their isolation from the rest of normal society. For theirs is no ordinary family curse…

Thirteen members of the family are possessed by the spirits of the Chinese zodiac and when embraced by a person of the opposite gender are transformed into their own personal zodiac animal. The Sohmas have managed to keep the curse private for generations, but when a young girl named Tohru Honda stumbles upon their secret, life at the Sohma household changes forever and conflicts erupt as zodiac rivals clash in this most unusual of situations.

Young Tohru's presence proves to be a positive influence upon the family members and she takes it upon herself to find a way to break the curse. But first and foremost she must promise to keep family's secret safe or face the consequences.