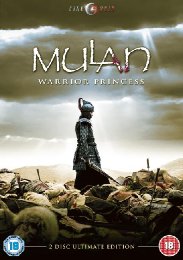 DVD
The Sword With No Name
Related Articles

Article
Spartacus: War of the Damned ends the saga on DVD and Blu-ray this April
Recently Added Items

I suppose you're expecting me to make some comparison with, or at least some mention of the Disney animation here. After all that will be the first point of reference for most Westerners when it comes to the almost 2000 year old Chinese legend of the girl turned warrior. The problem is, that I haven't seen Disney's Mulan, and this feature film from director Jingle Ma is my first encounter with the story. I'm coming fresh to it, and all that I know of the story is the girl turned soldier aspect, which is vague enough to be a universal trope rather than a revelatory plot point. All that I can tell you about this Chinese feature film telling of the Mulan legend is that there is neither hide nor hair of Eddie Murphy in the movie, something for which we can all be grateful. 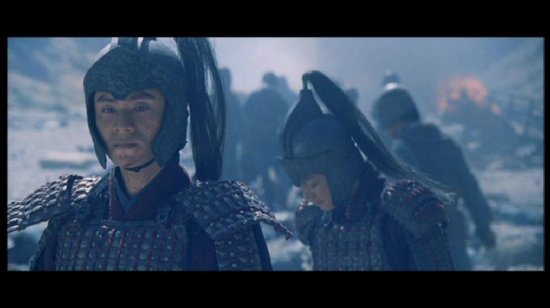 Hua Mulan is the spirited daughter of a military family, who perhaps takes too much of an interest in martial arts and not enough interest in finding a husband, for her sickly father's liking. But it is a time of strife for the Wei people, when the Rouran nomads assemble an army for their annual season of plunder and pillage. The Imperial decree goes out, that all military families should supply one man to strengthen the army. The trouble is that Mulan's family consists of her and her father, and her father lacks the strength to survive another war. So it is that she dresses up as a boy, and enlists in his place. Training isn't easy; especially when bringing a woman into camp is a capital offence, imagine what being a woman would elicit as a punishment. Fortunately, Mulan has her childhood friend Tiger with her, while she also finds a sympathetic ear in a recruit named Wentai. When the Rouran attack the camp, circumstances conspire to let Wentai and Mulan distinguish themselves on the battlefield, and soon the pair is moving up the ranks. But things have changed, the Rouran have dissension among their lines, with Mendu, the son of the present Danyu wanting to conquer instead of pillage, while there are elements in the Imperial Court who feel threatened by the meteoric rise of General Mulan. 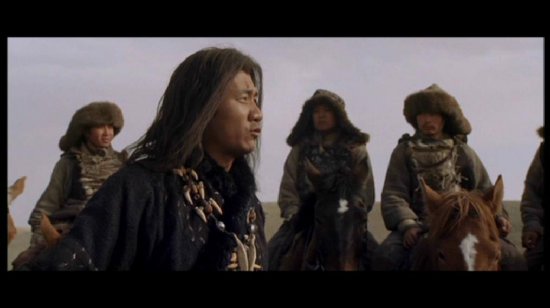 Mulan gets a 2.35:1 anamorphic transfer, which is pleasant enough, although as usual from Cine Asia, there is a Blu-ray release available as well, should you prefer something defined more highly. As is common with modern DVD transfers the only major noticeable issue is some slight aliasing in certain scenes, and moiré on fine detail. I did also notice some slight ghosting during nighttime scenes, but otherwise the film looks fine, bringing across some rather stupendous location filming with admirable clarity. That said, some of the CGI could have been a little better, but fortunately, most of it is used for distance scenes of barbarian hordes. 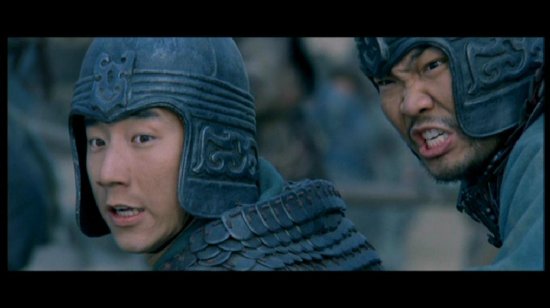 The Mulan DVD offers the options of DD 5.1 and DD 2.0 Mandarin, with optional English subtitles. The dialogue is clear throughout (as are the subtitles), the music is evocative and suits the period setting of the film, and the surrounds bring across the action and mayhem of the film's various battle sequences effectively enough.

Mulan follows the usual format of Cine Asia releases when it comes to extra features, coming as it does in a 2-disc Ultimate Edition (even though no lesser single disc release is available here). Both discs are packaged in an Amaray case with a disc on a central hinged panel, and both discs get animated menus.

Disc 1 offers only the trailer for Mulan, and trailers for 10 other Cine Asia releases besides the feature.

Disc 2 has the Interview Gallery, the Making of, and a Behind The Scenes section.

The Interview Gallery contains three featurettes, Cast and Crew Interview Part 1 (39 mins), Cast and Crew Interview Part 2 (32 mins), and Jiao Wu - Young Hua Mulan (4 mins). I tried watching the first two large featurettes, but could only bear a few minutes of either. They're talking heads sound bite interviews, very EPK in nature, but full of fast cuts and quick edits to piece together the required answers. Perhaps you recall Max Headroom, with frame jumps and jerky editing. These interviews are pieced together like that, and seeing someone's head jump over the screen five or six times during a ten-second response is damned distracting. The Young Hua Mulan interview is a straight to video piece that may be of lower quality, but is a lot easier on the eyes. 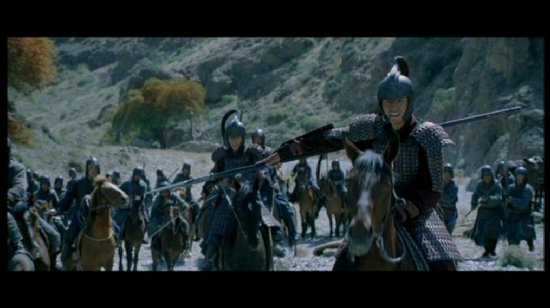 The Making Of lasts 15 minutes, and repeats some of the interviews, but this time against the background of clips from the film.

Behind The Scenes contains 5 segments, a minute long introduction, and four on-location featurettes running to a total of 25 minutes of b-roll footage and interviews.

Mulan turned out to be quite an enjoyable romp, eventually. The major drawback I have found with Chinese movies that tell the story of historical or mythical characters, is an almost inviolable reverence for the subject matter. It's usually a calm and considered retelling of a person's life story, rewritten to show them in the absolutely best light, and infused with all the positive social and moral values that audiences apparently require to stay on the straight and narrow. Drama, surprise, and layered characterisation usually falls by the wayside, and it's why I find films like Ip Man so leaden and plodding. Mulan starts that way, with an hour of build up that introduces the heroine, and takes us through the trials and tribulations of her training, her conflicted feelings of fighting in battle, and her eventual commitment to doing right by the people under her command. 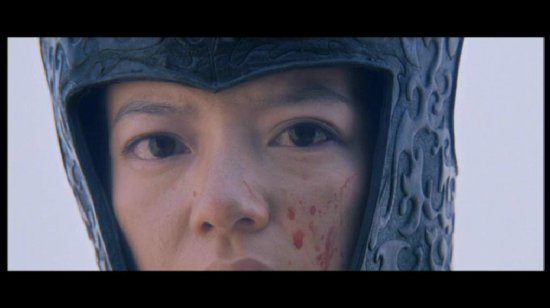 But then, about an hour into the film during which I was glancing at my watch, tempted to see what was on TV, thinking up some choice descriptions for the tedium that was beginning to suffocate me, the film started switching things around. All of a sudden, the somewhat understated character development to that point began to have meaning, the story threw in some twists and turns that I wasn't expecting, and that made me perk up, and the story also diverted from the 'party line' a little, espousing some values and ideas that aren't necessarily what you would expect from such mytho-historical biopics. The good guys aren't necessarily the whiter-than-white heroes that you would expect, while the villains aren't of a piece either. There's just as much weight given to the story of the Rouran as there is to that of Mulan, and the balance also makes it very intriguing. There's plenty of war and battle sequence to appreciate in the film, comparisons to Braveheart are most certainly apt, especially given the military climax to the film, but Mulan actually winds things back for the narrative finale, focussing more on character and emotion than grand spectacle and hordes of extras being slaughtered. 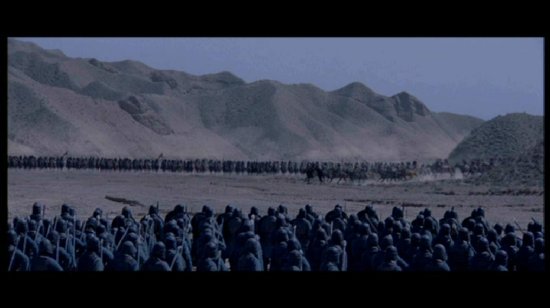 The film works well because of the sympathetic performances, especially from Wei Zhao as Mulan and Kun Chen as her romantic interest Wentai, and the two definitely have an appealing on screen chemistry. Jun Hu chews the scenery with relish as the villainous prince of the Rouran and is an effective presence in the film. It's understandable, although a little misplaced that this film is being marketed with the name of Jaycee Chan on the case. The son of Jackie Chan bears an uncanny likeness to his father, but his is more of a dependable support role; as Tiger he's Mulan's best friend, keeper of her secret, and keeping up her morale when it sinks to a low ebb. 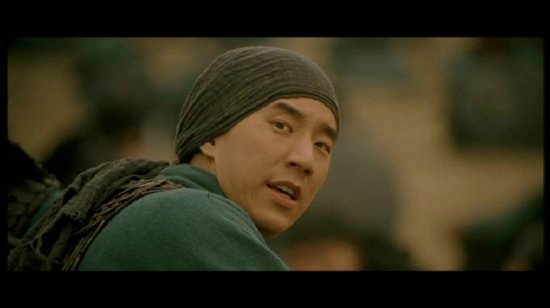 Mulan takes a devil's time to get going, and I must admit that the first hour did test my patience to the limit. But once the story gets into gear and throws some twists and turns into the mix, it becomes pretty engaging entertainment. You can't get away completely from the trite homilies, and jingoistic fervour, a rousing burst of the national anthem in the face of certain death did more to turn my stomach than any moments of battlefield gore and violence, but the film does leave you on a positive note, making the viewing experience worthwhile. Mulan is a film that you just have to be patient with.