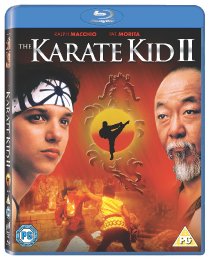 DVD
The Sword With No Name

The Karate Kid I & II Arrive on Blu-ray this July 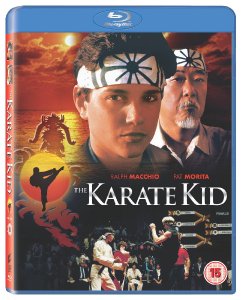 The Karate Kid
AND
The Karate Kid II
Starring Ralph Macchio and Pat Morita
The Original and the Sequel
Sweep onto Blu-ray Disc™ on July 19
Including Exclusive Blu-Pop™ Feature on Both Films, as well as
Featurettes and Director & Cast Commentary

East-meets-West when Sony Pictures Home Entertainment releases the heartwarming coming-of-age films, The Karate Kid and The Karate Kid II both available on Blu-ray™ from July 19. These beloved stories are kicked into high gear when viewed in 1080p high definition, and are sure to sweep audiences off their feet in only the way The Karate Kid can.

Viewers will have the opportunity to master Karate Kid-related trivia based on both films with the exclusive Blu-Pop feature, a picture-in-picture which includes "pop- up" interviews and trivia, fun film facts, anecdotes from the actors and martial arts information. The Karate Kid Blu-Pop feature also contains brand new interviews with stars Ralph Macchio and William Zabka! Viewers can also reminisce via featurettes: "The Way of the Karate Kid," "Beyond the Form," and "Life of Bonsai" as well as commentary with Oscar® winning director John G. Avildsen (Rocky), writer Robert Mark Kamen (The Fifth Element) and stars Ralph Macchio and Pat Morita on The Karate Kid. The Karate Kid II also includes a "sequel" featurette "The Sequel".
Both films are available as separate single-disc Blu-ray editions for £19.99 each.

The Karate Kid Synopsis:
A fatherless teenager faces his moment of truth in The Karate Kid. Daniel (Ralph Macchio) arrives in Los Angeles from the east coast and faces the difficult task of making new friends. However, he becomes the object of bullying by the Cobra Kai, a menacing gang of karate students, when he strikes up a relationship with Ali (Elisabeth Shue), the Cobra Kai leader's ex-girlfriend. Eager to fight back and impress his new girlfriend, but afraid to confront the dangerous gang, Daniel asks his handyman Miyagi (Noriyuki 'Pat' Morita), whom he learns is a master of the martial arts, to teach him karate. Miyagi teaches Daniel that karate is a mastery over the self, mind, and body and that fighting is always the last answer to a problem. Under Miyagi's guidance, Daniel develops not only physical skills but also the faith and self-confidence to compete despite tremendous odds as he encounters the fight of his life in the exciting finale to this entertaining film.

THE KARATE KID BLU-RAY BONUS FEATURES INCLUDE:
The Karate Kid has a run time of 127 minutes and is rated 15. 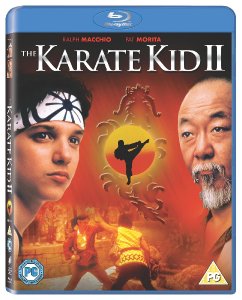 The Karate Kid II Synopsis:
Ralph Macchio and Pat Morita re-create the roles that brought them international acclaim in The Karate Kid II. Karate student, Daniel Larusso (Macchio), accompanies his wise and whimsical teacher, Mr. Miyagi (Morita), to his ancestral home in Okinawa. For the boy, it's a journey to an exotic new world offering new clues to his mentor's secret past. For Miyagi, it's an opportunity to see his father one last time and to rekindle a romance with his childhood sweetheart (Nobu McCarthy). But Miyagi's return also re-ignites a bitter feud with long-time enemy, Sato (Danny Kamekona) - a feud that involves young Daniel in a brilliant collision of cultures and combat. Now, far away from the tournaments, the cheering crowds and the safety of home, Daniel will face his greatest challenge ever when teacher becomes student and the price of honor is life itself.

THE KARATE KID II BLU-RAY BONUS FEATURES INCLUDE:
· "The Sequel" Featurette
· Blu-Pop - (™Activate the exclusive Blu-ray Exclusive) pop feature to reveal pop up trivia and more secrets from the film!
The Karate Kid II has a run time of 113 minutes and is rated PG.