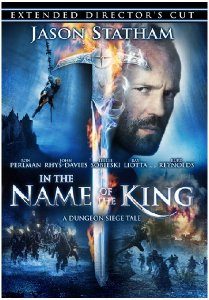 IN THE NAME OF THE KING:
Director's Cut

A simple farmer is forced to take up arms after evil tyrant Gallian unleashes a bloodthirsty army that ravages his village and ensnares his family.

With an all-star cast, including Ron Perlman (Hellboy), Burt Reynolds (Boogie Nights) and Ray Liotta (Goodfellas), at hand to join in the fight and incredible battle scenes by the world-renowned action choreographer of 'Hero', In The Name of The King delivers the most thrilling spectacle you could possibly imagine.

Now, that spectacle is bigger, bolder and more boisterous than ever!