Article
No One Knows About Persian Cats hits DVD in July 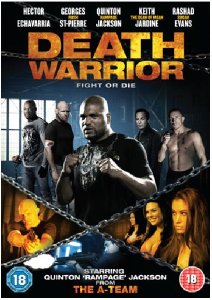 WHERE YOU FIGHT TO WIN AND WIN TO LIVE

Death Warrior features imaginative fights scenes where there are no rules; this dramatic tale follows the story of Rainerio played by Hector Echavarria. The film also stars Keith 'The Dean of Mean' Jardine and 'Sugar' Rashad Evans as they once againtransfer their mixed martial arts skills from the Octagon to the big screen.

Undefeated MMA champion Rainerio Isandro (Echavarria), is about to retire and choose a quieter life with his wife when he is forced to enter the warped world of underground fighting. Run by a vicious and unscrupulous gang, the fights are broadcasted on the internet where people place bets on who will win the fight - but in these ultra-violent battles winning means killing your opponent.

Rain is forced to fight against his will to save his wife, Kira, who has been injected with a slow-acting neurotoxin by the gang.

In a desperate race against time, Rain knows he must fight other blackmailed MMA fighters in a bid to make it to the ultimate showdown and become the one and only Death Warrior.

Death Warrior is directed by Bill Corcoran and written by Eamon Glennon and Hector Echavarria and is available to buy on DVD from Monday 26th July 2010.