DVD
The Foreign Duck, The Native Duck and God in a Coin Locker

DVD
Kakera: A Piece Of Our Life

Article
No One Knows About Persian Cats hits DVD in July 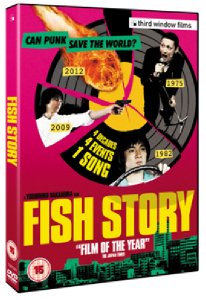 Third Window Films is pleased to announce the DVD release of:
FISH STORY (15)

Third Window Films is pleased to announce the DVD release of FISH STORY, the Japanese box-office hit which has received glowing international reviews. During its run in Japan it was chosen as 'Film of the Year' by the Japan Times, and during its theatrical run in the UK it received 5 stars in the Fortean Times, 4 in Time Out, 4 in the Daily Telegraph, 4 in Eye For Film and many more rave reviews.

Based on a novel by Kotaro Isaka, 'Fish Story' weaves together several seemingly separate storylines taking place at different points in time over a 37-year span to explain how a little-known punk rock song can save the world.

In 1975, an unpopular Japanese punk band called "Gekirin" (Wrath) starts work on their 3rd album. Unfortunately the band is a little ahead of its time; punk won't be marketable until the Sex Pistols debut in the UK the following year. Due to nonexistent sales, their record company decides to drop them and they break up soon after recording their final song: "Fish Story".

In 1982 a timid college student named Masashi (Gaku Hamada) becomes fascinated by strange rumors surrounding the song. Apparently, at a certain point in the recording there is a brief interlude where you can hear a woman scream. Later, he meets a mysterious woman at a party who inexplicably predicts that he will save the world one day.

In 2009 a teenager named Asami (Mikako Tabe) falls asleep during a school field trip and gets left behind on a boat. Initially distraught, she's eventually consoled by a kindly cook. Suddenly, men with guns storm in and attempt a boat-jacking.

In 2012 a huge comet can be seen in the sky on a path to destroy Earth. The US has failed in their attempt to blow it up and with only 5 hours left before impact, all major city streets are completely abandoned. That is, except for one record store that continues business as usual. Within the store, "Fish Story" can be heard playing on an old turntable…

Special Features on the DVD include an anamorphic widescreen transfer, removable english subtitles, a 35 minute making of, live performance by the band 'Gekirin' at Tower Records in Shibuya, theatrical trailer and trailers of other Third Window Films titles.