Cage fighting flick Unrivaled out in May on DVD 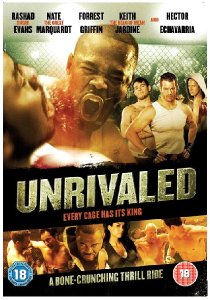 Some win. Some lose. Some are born to fight.
Every cage has its king

Released by E1 Entertainment on Monday 24th May 2010

Get ready to watch the best cage fighting action from today's biggest stars, in this ultimate mixed martial arts film. Featuring some of the most exhilarating and dramatic scenes ever seen, Unrivaled is one of the most flesh pounding DVDs ever.

With some of the best full-contact fighting sequences, Unrivaled is a story of ruthless, jaw-dropping punishment unlike anything released in the UK before. Starring some of the world's most famous superstars of the Ultimate Fighting Championship including the current UFC Lightweight title holder B.J. 'The Prodigy' Penn. Unrivaled is released exclusively on DVD through E1 Entertainment on Monday 24th May 2010.

Plunging audiences into the heart-stopping core of MMA with a turbulent tale - where only the best will survive the bloody, violent and incredible fighting and fulfil their dream - Unrivaled sees UFC legends transfer their MMA skills to the big screen, featuring Rashad 'Sugar' Evans, Forrest Griffin, Keith 'The Dean of Mean' Jardine and Nate 'The Great' Marquardt.

Argentinean kick boxer Hector Echavarria stars as Ringo Duran; one of the best undiscovered fighters in the world, who must realise his potential to change his life and complete his ultimate dream to become a professional fighter.

When the Extreme Cage Fighting League announces a competition to discover the next big thing, Ringo, supported by his manager and sexy girlfriend Kara, sacrifices everything and enters the cage. In a place where some fight for glory and some fight for the fight; Ringo fights because he is the best.

Unrivaled is directed by Warren P. Sonoda and written by Brad Bode and Hector Echavarria and is available to buy on DVD from Monday 24th May 2010.