Dragon Storm out on DVD in May 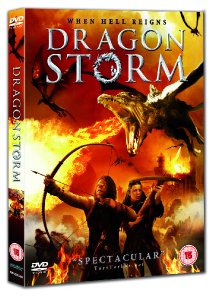 A brood of dragons attack a kingdom and a group of mismatched but talented villagers is formed to destroy them.

Meteors streak down from space. Explode into villages, crop fields and blast into an evil-looking castle. Home of the dark, malicious KING FASTRAD. One meteor lands in a lake and does not explode. Smooth exterior, alien-like shell. The shell cracks open and five feral, scaly dragons move forth. But, these are nothing like the dragons we've seen before...

These creatures are monstrous fire-breathers who can fly, shoot poisonous quills from their spines and impale with their barbed, scorpion-like tails. The dragons attack, ripping through Fastrad's kingdom. The dark king and his men flee to a neighboring kingdom belonging to KING WEDNESBURY. Wednesbury is good king and provider for his people. Fastrad pleads with the king to help protect him from the dragons which are coming to his land next. King Wednesbury agrees and forms a team of dragon-slayers.

He chooses a local hunter, SILAS, familiar with the wood, footpaths and horsetrails. Next is REMMEGAR, the king's wise doctor and resident biologist who is already studying one of the dead dragons to find weaknesses. LING, a Chinese trader passing through the kingdom. Ling provides everything from gunpowder to an array of Eastern weaponry. A woman named NESSA, surviving daughter of an engineer who was killed by the dragons. Nessa will oversee the completion of her father's ballista (medieval siege weapon like a giant crossbow that shoots a log, constructed on the slope of a hill or small mountain).

King Fastrad demands his own head warrior, THELDAG, be added to the team. Last, King Wednesbury's own daughter MEDINA wants to go along. Naturally, the king won't allow it but the tough and feisty Medina runs off with them anyway.

The team of dragon-slayers engage the winged beasts. Silas and the team attack with everything; the ballista, gunpowder, crossbows, spears, plenty of raw courage and sheer guts. But another battle takes place unseen as Fastrad and Theldag conspire to take over King Wednesbury's land as he is busy fighting the dragons.

The final battle is set when Silas traps a baby dragon and takes it back to Wednesbury Castle. The enraged mother dragon shows up to take back her hatchling. Bent on killing and torching anything that stands in her way.