Astro Boy hits DVD and Blu-ray in May 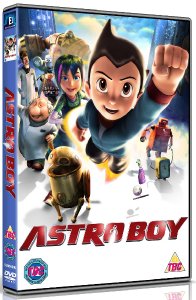 One of the most seminal, iconic and coolest anime creations of all time, Astro Boy is now brought to vivid life in a brand new CGI animated feature film jam-packed with action, adventure, comedy and heart. Coming to DVD and as a Blu-ray plus DVD Combi Pack on 31st May 2010 after a thoroughly successful £3.6m run at UK cinemas and recommended as "exciting and charming… a treat for all kids, big and small" (Sun TV Magazine), the timing of Astro Boy's release makes it ideal half-term entertainment for children of all ages.

Having garnered a Four Star review in The Sunday Times and described as "a fast, fun superhero adventure" (Independent on Sunday), "action-packed from beginning to end" (Toxic Magazine) and "the coolest robot hero since WALL-E… Astro-nomically great fun" (Nitro Magazine), this futuristic "Pinocchio" tale is full of heartwarming charm and universal appeal guaranteed to keep children and adults enthralled.

Astro Boy (Highmore) is a young robot with incredible powers created by a brilliant scientist named Dr. Tenma (Cage) in the futuristic Metro City, a gleaming metropolis floating in the sky. Powered by positive 'blue' energy, he is endowed with super strength, X-ray vision, unbelievable speed and the ability to fly.

Embarking on a journey in search of acceptance, Astro Boy encounters many other colourful characters along the way, including a trio of incompetent rebel robots and a group of friendly orphans living on the neglected trash dump of the earth's surface. There, he learns the joys and emotions of being human and gains the strength to embrace his destiny.   Discovering his new friends and family are in danger, Astro Boy marshals his awesome super powers and returns to Metro City in a valiant effort to save everything he cares about and to understand what it takes to be a hero.

A colourful and beautifully rendered, fast-paced, sci-fi adventure that barely pauses to take a breath, Astro Boy will delight audiences that enjoyed other futuristic CGI animated features such as 'WALL-E', 'The Incredibles' and 'Robots'.

Astro Boy (cert. PG) will be released on DVD (£17.99) and as a Blu-ray plus DVD Combi Pack (£22.99) by E1 Entertainment on 31st May 2010. Special Features include: two all new animated sequences ('Astro vs. The Junkyard Pirates' and The RFF in 'The New Recruit'); Inside The Recording Studio; Designing A Hero; Building Metro City; Getting The Astro Boy Look; Image Gallery; Creating A Global Icon; Dolby 5.1 audio; optional English subtitles for the hard of hearing.