Article
The Ungodly arrives in June

Article
Stone Angel out in June

Article
Bigga Than Ben out in June 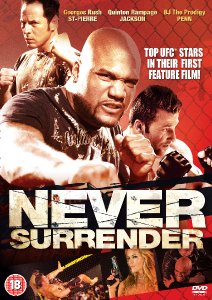 Introducing the superstars of UFC in their first ever feature film...

For the first time ever, the world-famous superstars of the Ultimate Fighting Championship join forces for their big screen debut in a high octane action epic delving into the blood-thirsty underbelly of Mixed Martial Arts.

On 22nd June 2009, Never Surrender, available on DVD, will plunge audiences into the heart-stopping core of MMA with a turbulent tale of 'kill or be killed' as world champion Diego Carter discovers that the real fight begins outside of the octagon - and as the stakes rise higher than ever, do you fight for money, glory or for sheer blood lust?

When a sexy promoter lures MMA World Champion Diego Carter (Hector Echavarria) into the illegal world of underground cage fighting, he quickly realises that he is embroiled in a violent grapple for survival… and there are no referees in the fight for his life.

With women, wheels, and world-class fighters - Never Surrender takes you to the edge of terror in this unparalleled feature film.  Directed by and staring MMA fighter turned Hollywood legend Hector Echavarria (Confessions of a Pit Fighter) and an impressive line-up of UFC superstars including Quinton 'Rampage' Jackson, Georges 'Rush' St. Pierre and BJ Penn; Never Surrender will grasp audiences with an unrelenting choke-hold from the opening bell.