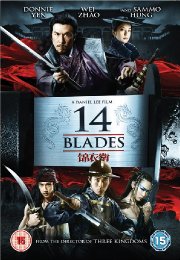 Synopsis:
At the dawn of the Ming Dynasty, in order to consolidate all power and keep his bloodline on the throne, the Emperor established a secure system of defence for himself by taking young orphans off the street and training them to the highest martial arts standards to become his secret guards. Called Jinyiwei, the Brocade Guards, these warriors operated under their own code of law, led by the most skilled of their number, Qinglong (Yen). Bestowed upon him as leader is a box containing 14 steel blades, eight of which are to be used for interrogation and the remaining six for execution.

When the Imperial Court is usurped by the evil eunuch Jia, Qinglong is assigned to steal a list identifying those still loyal to the Emperor. But unknown to him, the Jinyiwei themselves have fallen under the control of Jia, who, in league with an exiled noble, Prince Qing (Hung), is plotting to rebel against the Emperor and seize power. During his mission to obtain the list, Qinglong is betrayed by his own men and barely escapes with his life. Now, as the most wanted man in the land, he must seek out and rally the loyalists to rise against Jia and restore the Emperor to power. But standing before him are the deadliest assassins in the land - his former brethren, the Jinyiwei.