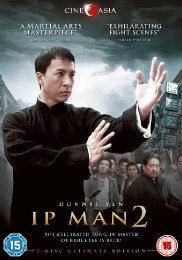 However, when corrupt colonial officials stage a life-or-death contest with formidable British boxer, Twister (Darren Shahlavi), to humiliate the Chinese people, the masters quickly forget their differences. Soon, the eyes of the nation are on the one man capable of securing a victory-Grandmaster Ip Man! One of the biggest Chinese blockbusters in recent history, Ip Man 2 elevates martial arts fight choreography to new heights of excellence and delivers more excitement than ever before!