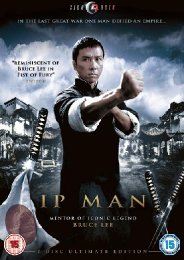 Synopsis:
An untouchable classic, Ip Man is a glorious and evocative biopic of the man who defied an empire, pioneered the world's most explosive fighting art, and went on to mentor Bruce Lee - the greatest martial arts icon of all time.

Set in Foshan, China, during the Sino-Japanese War, Ip Man vividly brings to life the brutality of the infamous Japanese occupation, where once proud men are forced to fight to the death for a precious bag of rice. Defined by courage and humility, one man rises to the fore, Grandmaster Ip Man (Donnie Yen): a Wing Chun impresario, whose matchless fighting skill is revered all over China.

Upon refusing to teach his beloved fighting art to the invading Japanese soldiers, he is forced to fight for the honour of his country in a series of battles that will culminate in a kill-or-be-killed showdown with Japan's greatest fighter.

With sumptuous production values, a career-defining performance from Kung Fu Superstar, Donnie Yen, and inspired close-quarter fight sequences by action-legend, Sammo Hung, Ip Man is an unforgettable event-movie experience that will define the benchmark in action-cinema for years to come.