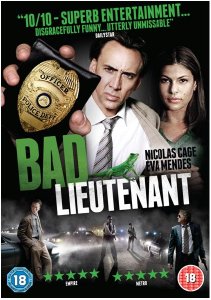 BAD LIEUTENANT
Available on Blu-ray and DVD from September 27th, 2010

Take a walk on the wild side with two of modern cinema's greatest mavericks as the incomparable BAD LIEUTENANT comes to Blu-ray and DVD from September 27th, 2010, courtesy of Lionsgate Home Entertainment.

NICOLAS CAGE (Ghost Rider, Leaving Las Vegas) delivers his most powerful performance in years as Terrence McDonagh, a New Orleans cop caught firmly on the cusp between good and bad. Having bravely taken part in a rescue that has left him in permanent pain, McDonagh is now a slave to the drugs that alleviate his condition. A dysfunctional relationship with a coke-using hooker (EVA MENDES, Training Day, Hitch) and a habit spiralling out of control forces McDonagh to team up with a local drug lord (ALVIN 'XZIBIT' JOINER, XXX2, Gridiron Gang) as he moves further and further away from the line he once vowed to protect at all costs.

Also starring VAL KILMER (Kiss, Kiss, Bang, Bang, The Ghost & The Darkness) and directed by the legendary WERNER HERZOG (Grizzly Man, Fitzcarraldo), making his first major American movie, BAD LIEUTENANT is a tour-de-force and instant classic, combining blistering action, surreal comedy and gripping drama to deliver one of the most memorable experiences of the year.

Firmly re-establishing both Herzog and Cage as true icons, BAD LIEUTENANT is an immediate must-see classic even more-so considering the wealth of extra features that have been packed onto both the DVD and Blu-ray editions!