Blu-ray
A Fugitive From the Past
Related Articles

First season of Justified arrives on DVD in November 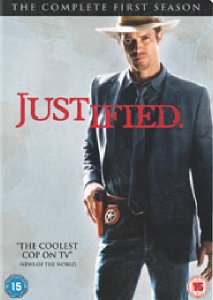 Containing 13 episodes, Justified: The Complete First Season follows the turbulent life of Deputy Marshall Raylan Givens (Timothy Olyphant, TV's "Damages","Deadwood") when he is transferred back to his home town following the killing of a Miami hitman.

All 13 episodes will be included on the 3 disc DVD along with exclusive bonus content. Justified: The Complete First Season will be available for RRP £39.99 and is rated 15.

SYNOPSIS:
Timothy Olyphant stars as a modern-day Western hero based on the character created from legendary crime novelist Elmore Leonard's "Fire in the Hole."

Deputy Marshall Raylan Givens (Olyphant) is exiled to his hometown of Harlan County, Kentucky after the shooting of a Miami drug cartel hit man raises debate over his renegade style of law enforcement. Unfortunately it isn't long before the people he left behind begin to surface in the most unexpected ways.


Justified: The Complete First Season has a run time of approximately 537 minutes and is rated 15.

Visit Sony Pictures Home Entertainment on the Web at www.SonyPictures.com.