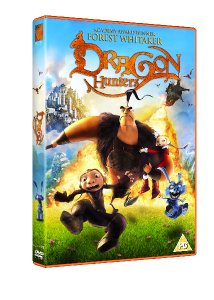 Impeccably animated and cut through with an imaginative sense of mischief and humour, DRAGON HUNTERS is available on DVD from 11 October 2010 courtesy of Icon Home Entertainment.

This enchanting and exciting adventure tells the story of a land which is cowering in the expectation of a mighty dragon's unwanted visit to plunder and destroy. With the resident knights being all but annihilated, it is Zoe, the king's granddaughter who volunteers to save the day, having always dreamt of being a knight herself. However, because she is a girl the king has other plans for her and the fate of the kingdom is left hanging in the balance.

When Zoe sneaks out she meets Lian-Chu (Forest Whitaker - The Last King Of Scotland, Ghost Dog), a gentle giant, and his opportunistic friend, Gwizdo (Patrick Timsit) who call themselves Dragon Hunters but are in fact useless at their job. Zoe, convinced they're up to the challenge, decides that with her help, they will be the ones to slay the dragon. Persuaded that she has found the heroes of her dreams, she is going to drag them into the strangest and most dangerous of adventures...

A rapid succession of exhilarating chases, imaginative creatures, and problem solving group dynamics will keep an audience of both children and adults consistently entertained. The animators have invested thought into almost everything that appears on the screen, and this attention to detail is staggering. But what truly makes DRAGON HUNTERS such an engaging spectacle is its stunning CG graphics, which are solidly rich, detailed, and an eye-popping marvel to behold.