Scooby Doo in Camp Scare out on DVD for Halloween 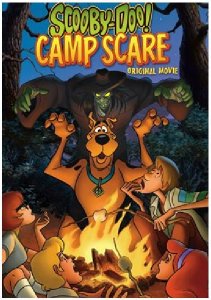 THE ALL NEW ORIGINAL ANIMATED MOVIE
AVAILABLE FOR HALLOWEEN!

The creepiest campfire ghost stories come to life on the all new, must have, animated Scooby-Doo original movie Scooby-Doo! Camp Scare. Viewers will want to join in the high-jinks with the lovable Great Dane and the rest of the Mystery Inc. gang as they explore mysterious goings on at a haunted summer camp. Scooby-Doo! Camp Scare is available on DVD from 11th October 2010 courtesy of Warner Home Video.

Roast your marshmallows and hide under your sleeping bag covers, because this campfire experience is going to get spooky! In this brand new adventure, Scooby-Doo and the gang head out in the Mystery Machine to visit Fred's favorite childhood camp. They soon learn that creepy creatures from their favourite campfire stories have come to life and now haunt the nearby woods and lake, threatening to shut down the camp once and for all. Will our heroes; Scooby-Doo, Shaggy, Fred, Daphne and Velma manage to end all the spooky occurrences and stop the creatures before the camp is forced to close its doors forever?

Scooby-Doo, the hit franchise follows the adventures of Daphne, Fred, Shaggy, Velma and Scooby-Doo as they travel in their van "The Mystery Machine" and solve cases typically involving ghosts, monsters or other supernatural forces. High-jinks always ensue, with their investigations resulting in entertaining chase scenes mixed with catchy musical numbers and hilarious antics. The original television program went on to become one of the most successful animated shows in history and spawned several spin-off series, specials, consumer products and live action films.

Producing for network and cable television, online, home entertainment and feature films both domestically and internationally, Warner Bros. Animation is highly respected for its creative and technical excellence, as well as maintaining the studio's rich cartoon
heritage. Warner Bros. Animation also oversees the creative use of, and production of animated programming based on classic animated characters from the Hanna-Barbera and DC Comics libraries. Warner Bros. Animation is one of the most honored animation studios in history, garnering a grand total of six Academy Awards®, 35 Emmy® Awards, the George Foster Peabody Award, an Environmental Media Award, a Parents' Choice Award, a Humanitas Award, two Prism Awards and 20 Annie Awards (honoring excellence in animation).