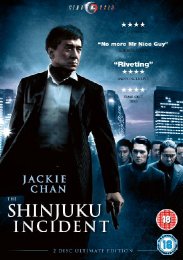 Hundreds of Chinese refugees wash up on Japan's Wakasa Bay. Each has a dream of a better life, but most will encounter only prejudice and oppression. One, a law-abiding farm-worker known as Steelhead (Jackie Chan), has come to find the woman he has loved since childhood (Xu Jinglei), but his quest ends in bitter rejection, when he discovers she has married Yakuza underboss, Eguchi (Masaya Kato).

Heartbroken, his life descends into darkness, and petty crime quickly escalates to murder. With blood on his hands, he will risk everything to secure a future for his people, as they face an increasingly brutal onslaught from a criminal empire protected by a secret code. However, ancient traditions will not be broken, and his defiance will lead to all-out war, as both factions fight for control of the infamous Shinjuku district in the heart of Japan's greatest city.

Ultimately pursued by forces on both sides of the law, he must fight for redemption and the survival of those he loves in the darkest night he has ever known...