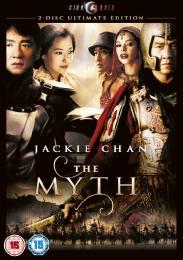 Synopsis:
In the year 221BC, an ancient Chinese society built a breathtaking mausoleum for their First Emperor. A place of fabled magic and deathly silence, legend has it to ensure utmost secrecy all 700,000 who worked on the project were entombed with the dead King.

When intrepid archaeologist Jack (Jackie Chan, Forbidden Kingdom, Rush Hour, New Police Story) stumbles upon an ancient sword and a magical gemstone that defies the force of gravity, he is led to the aged shrine - hidden beneath more than 2,000 years of lies, tall-tales and lost adventurers.

Faced with a series of ingenious death traps, unspeakable evils and visions that make him question his present purpose and past existence, Jack soon realises the Emperor's legacy is far more than just this dark lair, but rather a series of elemental secrets that could be the greatest story of all time. Can Jack survive this one-in-a-lifetime adventure and make The Myth reality?

The Myth is Jackie back to his very finest in this blend of much-loved Chinese mythology and awesome modern day action.