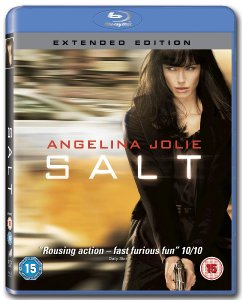 London, UK (20/10/10) - Academy Award® winner Angelina Jolie (Best Supporting Actress, Girl, Interrupted, 1999) stars as a CIA agent on the run after a defector accuses her of being a Russian spy in the international box-office hit SALT, debuting on Blu-ray™ and DVD on December 13 from Sony Pictures Home Entertainment. The non-stop, action-packed event film was directed by Phillip Noyce (Clear and Present Danger, Patriot Games) and also stars Liev Schreiber (X-Men Origins: Wolverine) and Chiwetel Ejiofor (2012, Talk to Me). Extensive bonus materials include the original theatrical film plus two additional extended cuts not seen in cinemas. Additional features include filmmaker commentary and featurettes that take viewers behind-the-scenes on the adrenaline-pumping thrill ride of the year. SALT will be available on Deluxe Extended Edition Blu-ray™ for £24.99 RRP and Deluxe Extended Edition DVD for £19.99 RRP.

Synopsis:
Angelina Jolie stars as Evelyn Salt, a trusted and loyal CIA operative who is forced to go on the run when a Russian defector convinces her superiors that she's a double agent sent to assassinate the President of the United States. As the intense manhunt heats up, Salt uses all of her skills as a covert operative to elude capture as she fights to uncover a secret so explosive it could change the course of world history.