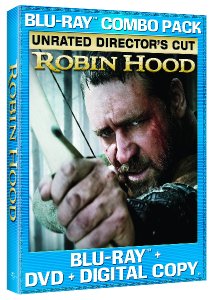 Oscar® winner Russell Crowe reunites with Gladiator director Ridley Scott to reveal the untold story of a common archer's rise to become a hero in Robin Hood, the $309 millionjtrebor[at]ku.oc.reweiver.liam:143/fetch%3EUID%3E.INBOX%3E64577#_ftn1" target="_blank">[1] worldwide blockbuster coming to Blu-ray™ Hi-Def Combo Pack, 2-Disc Special Edition DVD and single disc DVD on September 21, 2010 from Universal Studios Home Entertainment. All of these versions will feature the theatrical film, as well as a never-before-seen unrated director's cut of the movie. The film and its unrated version will also be available day and date for digital download and video on demand.

The 3-disc Robin Hood Blu-ray™ Combo Pack will feature a Blu-ray and DVD copy of the theatrical and director's cut film, as well as a digital copy of the director's cut that can be viewed on an array of electronic and portable devices anytime, anywhere. Additionally, both the Blu-ray™ Combo Pack and the 2-Disc Special Edition will feature deleted scenes and filmmaker commentary, plus an extensive look at the making of Robin Hood that includes behind-the-scenes interviews with cast and crew. The Blu-ray™ release also exclusively features an interactive "Director's Notebook," which seamlessly takes fans inside the making of the specific scenes of the film, from production design to special effects.

Robin Hood's expansive scale and exhilarating action sequences hit a bulls-eye with critics around the world, with Pete Hammond of Boxoffice Magazine saying, "If you've think you've seen Robin Hood, think again," and adding that that the film is "spectacular epic movie making at its best in the tradition of Gladiator and Braveheart." Robin Hood is "An original, new take on a classic story," in the words of Patrick Stoner, WHYY - PBS (Philadelphia) and "A must-see epic adventure!" according to Christina Vandre, KARE - NBC (Minneapolis). Dan Jolin of Empire gives itfour stars, calling it, "Ridley Scott and Russell Crowe at their most entertaining since Gladiator."

· DIRECTOR'S NOTEBOOKA seamless multimedia experience focusing on the director's vision gives viewers a peek inside Oscar® nominee Ridley Scott's unique filmmaking process. Incorporating behind-the-scenes footage and interviews with Scott and his trusted inner circle of collaborators, this feature launches at critical moments throughout the film to illuminate the task of mounting a vast production like Robin Hood.
· THE ART OF NOTTINGHAMA special look at the portfolio of designs generated for the film, including video introductions by key department heads such as production designer Arthur Max and costume designer Janty Yates. Galleries of concept art, costume designs, storyboards and other imagery are featured.
· BD-LIVETMAccess the BD-Live™ Center through your Internet-connected player to get even more content, watch the latest trailers and more.
o MY SCENESBookmark your favorite scenes from the movie.
· pocket BLU™ app Experience Blu-ray in an exciting new way with the pocket BLU™ app for iPhone, iPod Touch, iPad, Blackberry, Android, PC and Macintosh. With this app, you can work seamlessly with a network-connected Blu-ray™ player to activate advanced features such as:
o Advanced Remote Control: A sleek, elegant new way to operate your Blu-ray™ player. Users can navigate through menus, playback and BD-Live™ functions with ease as well as activate a timeline to skip to any point in the movie with the slide of a finger.
o Video Timeline: Users can easily bring up the video timeline, allowing them to instantly access any point in the movie.
o Mobile-To-Go: Users can unlock a selection of bonus content with their Blu-ray™ discs to save to their device or to stream from anywhere there's a Wi-Fi network, enabling them to enjoy exclusive content on the go, anytime, anywhere.
o VIRTUAL Keyboard: Enter data into a Blu-ray™ player with your device's easy and intuitive keyboard to facilitate such Blu-ray™ features as chatting with friends and sending messages.
· uHEARAlways catch every word with uHear! This innovative feature instantly skips back a few seconds on your Blu-ray™ disc and turns on the subtitles for the section you couldn't hear!
· INTERACTIVE TICKER: Get the latest information about Universal's theatrical and Blu-ray™ releases. Plus, get updates about upcoming BD-Live events, awards and TV shows on NBC

Robin Hood chronicles the life of an expert archer, previously interested only in self-preservation, from his service in King Richard's army against the French. Upon Richard's death, Robin Longstride (Oscar® winner Russell Crowe) travels to Nottingham, a town suffering from the corruption of a despotic sheriff and crippling taxation, where he falls for the spirited widow Lady Marion (Oscar® winner Cate Blanchett), a woman skeptical of the identity and motivations of this crusader from the forest. Hoping to earn Lady Marion's hand and salvage the village, Robin assembles a gang whose lethal mercenary skills are matched only by their appetite for life. Together, they begin preying on the indulgent upper class to correct injustices under the sheriff. With their country weakened from decades of war, embattled by the ineffective rule of the new king and vulnerable to insurgencies from within and threats from afar, Robin and his men heed a call to ever greater adventure. This unlikeliest of heroes and his allies set off to protect their country from slipping into bloody civil war and return glory to England once more.