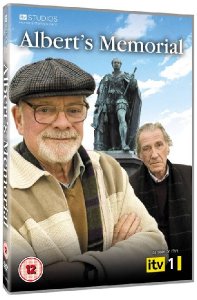 THE TALE OF A LIFE CHANGING WISH

Albert's dying wish to be buried on the little hill outside Hinderburg in Germany is the catalyst which tests the survival of Harry & Frank's friendship, as events and conflicts that shook and traumatised their comradeship for more than half a century re-surface to haunt them.

When Albert passes away, the two kidnap his body, strapping his coffin to the roof rack of Harry's black cab. What follows is a bizarre journey to honour their friends' last wish.

As Frank and Harry make their ill-fated yet humorous way through Europe, they pick up German hitchhiker Vicki (Judith Hoersch), who intuitively learns of the dark secret which has driven a wedge through the heart of their friendship. Upon reaching Germany, it soon dawns upon Frank that she has intervened significantly with their lives.

Albert's Memorial is written by Thomas Ellice (A Touch of Frost, Inspector Morse) and reunites Sir David with David Reynolds, ITV Yorkshire's Controller of Comedy Drama and Drama Features, who is co-Executive Producer on the project with Sir David. Gina Cronk (New Tricks, Mobile) is the producer and David Richards (Little Devil, Alibi, Reckless) is the Director.