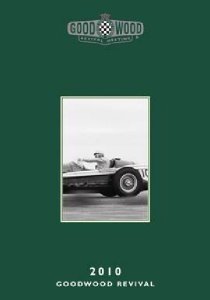 For spectators and competitors alike, the 2010 Goodwood Revival was another fabulous weekend, with exhilarating on-track action, spectacular air displays, and a wealth of other attractions and entertainment.

This year's Revival saw many great drives, including a fine win for Tom Kristensen in his very first Goodwood race, despite great pressure from Martin Brundle. Also, a mighty drive from 10th on the grid to victory in the Gordon Trophy by Revival regular Nick Wigley who won the Rolex Driver of the Meeting award. The 70th anniversary of the Battle of Britain was marked in true Goodwood style with the nine veterans appearing on the grid in matching Jeeps, joined by Lord March, who paid a heartfelt tribute. Also assembled were a Spitfire and Hurricane aircraft, the Band of HM Royal Marines, and the Royal Horse Artillery.

The iconic aircraft of the Battle of Britain Memorial Flight completed a fitting and emotional tribute. The Freddie March Spirit of Aviation welcomed an incredible collection of pre-1966 aircraft. The world's only remaining airworthy Hawker Demon aircraft from 1937 was voted the Freddie March Spirit of Aviation winner by a panel of celebrity judges, including actor Rowan Atkinson, chef James Martin, and musicians Nick Mason (Pink Floyd) and Bruce Dickinson (Iron Maiden).

Over 134,000 spectators attended this year's Revival, with the vast majority dressing in their finest period fashions, showing off their tweed jackets and pleated skirts in the late September sunshine. Saturday was Ladies Day and expert judges from the world of fashion roamed the streets and lawns of the Revival seeking out the most stunningly dressed ladies. So sit back and enjoy these special moments, together with much more of the action from the 2010 Goodwood Revival.