DVD
The Avengers - The Complete Series 6

Season 6 of The Avengers comes to DVD in December 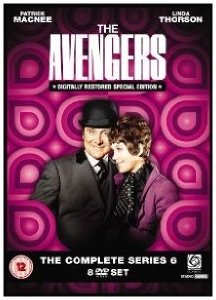 THE AVENGERS: THE COMPLETE SEASON 6

This Christmas it's the 50th Anniversary of the show that defined a whole era of Television, '60s chic and '60s ... far out. Series 6 of the greatest spy-fi series comes to DVD on 6th December 2010, courtesy of Optimum Home Entertainment.

As the 1960s progressed, so too did The Avengers,the last series reflecting radically changing times with breath-taking, eye-popping visuals in glorious, state-of-the-art colour. In 1968 the show was at its peak - the longest running espionage series produced for English-language TV, reaching audiences in a record-breaking 120 countries.

Patrick Macnee's John Steed is still as suave, urbane and debonair as ever he was - and quite unperturbed by the arrival of a new partner. Linda Thorson stepped into the series as Tara King and, as the most breath-taking, eye-popping visual of them all, she was a stunning and worthy successor to Cathy Gale and Emma Peel.

As ever, The Avengers continued to thrill with wildly imaginative and dependably bizarre new storylines. A cure for the common cold is mysteriously killing research doctors; a computer "murder" leads to chaos; a glass of milk proves hazardous to Steed's health; an ancient dagger holds the key to a secret treasure; a rash of Steed imposters cause havoc at a peace conference; enemy agents turn a dentist's office into a torture chamber; a military academy trains a ruthless breed of teenage space travellers ...

Now, with the release of The Avengers, you can watch these fantastic classics time and again in a DVD set featuring a full restoration* of all episodes and a host of groovy and enthralling extras. The perfect stocking filler for Christmas, this definitive box set is a feast of diabolical plots, exquisite charm and lavish '60s psychedelia - all blended to perfection with a quintessential take on the English flair for the weird, the strange and the cool.

The perfect companion to The Avengers is The Avengers: A Celebration, is a glorious visual tribute to all things Avengers, out now from Titan Books.

* While every effort has been made to secure the best source material, imperfections commensurate with the age of materials may be evident, despite full digital restoration.