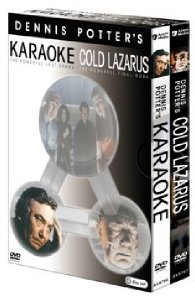 'Potter indulges in a writer's ultimate fantasy: that his characters actually come alive. Then he turns that fantasy into a nightmare.'
New York Times

HUGELY ACCLAIMED TV playwright Dennis Potter was renowned for mixing fantasy and reality in some of the finest television dramas ever written. Now his famous last works Karaoke and Cold Lazarus are being released on DVD for the first time ever.

Having been diagnosed with terminal cancer and with less than six-months to live, Potter undertook a race against time to complete his final two creations that were uniquely shared between Channel 4 and the BBC. Karaoke and Cold Lazarus will be released as a stunning four-disc boxed set, on 6 September 2010 courtesy of Acorn Media.

In Karaoke writer Daniel Feeld (Finney) is working on a fictional TV screenplay "Karaoke", about a stunning young woman who works in a sleazy karaoke bar run by the nasty Arthur "Pig" Mallion, But the lines between the real world and his story begin to blur when he encounters his written words being spoken in the world around him. He desperately tries to control the events while dealing with an evolving serious illness. He plans to depart the world with an explosive ending that will have great repercussions later.

Cold Lazarus, the powerful final work from Potter, and follow up to Karaoke, is set almost 400 years in the future as a group of scientists gather to watch the projected memories of a human brain - the cryogenically stored brain of writer Daniel Feeld. In a time that is far from free, the memories offer a new kind of reality and freedom. As elements of truth and fiction explosively intertwine, will Daniel's mind finally be set free?