Not Going Out : Series 3 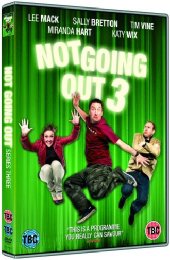 Synopsis:
The acclaimed third series of Not Going Out, the Royal Television Society and Golden Rose award-winning BBC ONE sitcom written by and starring LEE MACK, is to be released on DVD by Universal Pictures Playback. Packed full of the jokes, jibes and general misunderstandings of happy-go-lucky Lee (LEE MACK), his best mate Tim (fellow BAFTA Award winner TIM VINE) and the object of Lee's hapless affections, his landlady and Tim's sister Lucy (SALLY BRETTON, The Office,Green Wing) the DVD is out on 27th September 2010.

Following the series two finale, in which Lee successfully sabotaged Lucy's relationship with her then boyfriend Guy, we find a man still unburdened by ambition or drive, and with no significant plan to address his feelings for Lucy. However with pregnancies, insurance scams and lesbian neighbours muddying the water, not to mention having to deal with his well-meaning but utterly useless cleaner Barbara (MIRANDA HART, Miranda), Tim's ditzy girlfriend (KATY WIX, Torchwood) and his long-lost dad (TOMMY BALL) it looks like he's got enough to keep his mind off the bigger picture…

LEE MACK is an acclaimed writer and performer, as well as the star of Not Going Out. Whilst becoming one of the UK's most established comedy acts - extending his 2010 national tour Going Out twice, totaling over 100 shows, selling in excess of 200,000 tickets and recorded for DVD release this Autumn - LEE's credits also include: a resident team captain on Would I Lie To You? (BBC ONE), guest host on Have I Got News For You (BBC ONE) and as a key writer and performer in the BAFTA Award winning The Sketch Show (ITV1), which ran for two series in the UK before LEE went on to workalongside KELSEY GRAMMER in an American version of the show. He has also written and starred in his Sony Radio Award nominated The Lee Mack Show (BBC Radio 2); hosted They Think It's All Over (BBC ONE); and headlined and hosted Live at the Apollo (BBC ONE). An award-winning stand-up, LEE'S 2007 tour was a sell-out, nominated for a British Comedy Award, recorded for release on DVD, sold over 150,000 copies and subsequently broadcast on Channel 4. A nominee for the prestigious Perrier Award, LEE has won a Time Out Best Live Comedy Award and in 2005, the Best Stand-Up award at the Loaded LAFTAS

Special Features:
Not Going Out on Location - behind the scenes