Article
Horror flicks Husk, We Are What We Are and The Unforgiven hit DVD and Blu-ray in March

The complete series of Butterflies comes to DVD this March 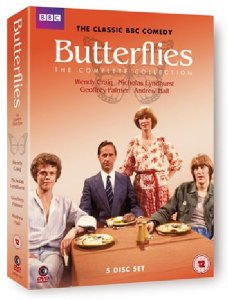 Butterflies is one of the best-loved classic BBC sitcoms of the late 1970s/early 1980s and now just in time for Mother's Day comes the outstanding Butterflies The Complete Collection DVD box set courtesy of Second Sight.

Ria (Craig), a suburban housewife frustrated with mundane family life, craves some escape from the drudgery. As hard as she tries she has never mastered the domestic arts and her well-meant efforts in the kitchen result in spectacular disaster. Husband Ben (Palmer) and layabout sons Russell and Adam live in fear of mealtimes as unidentified creations need coaxing from the pan and the words 'egg custard' induce panic. Desperate for some excitement in her life, could a chance meeting with the charming and wealthy Leonard be the answer she is looking for?

Butterflies The Complete Collection features all four series made up of 28 episodes including the Christmas Special in a stunning five-disc box set and will be released on 21 March 2011.