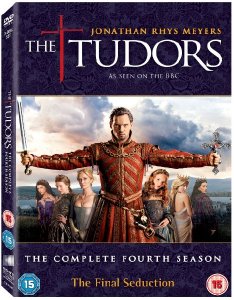 THE TUDORS - THE COMPLETE FOURTH SEASON

Includes 10 Episodes with Bonus Materials
Including Farewell to the King: Michael Hirst on "The Tudors" Finale.

Available on Blu-ray DiscTM and DVD from 21st March 2011


Enter the sexy and lavish world of The Tudors and get ready for a bodice-ripping finale when Jonathan Rhys Meyers stars for the last time as the ruthless and passionate Henry VIII. The Tudors - The Complete Fourth Season is released to buy on Blu-ray and DVD from 21st March 2011, courtesy of Sony Pictures Home Entertainment.

Season 4 sees King Henry VIII marry his fifth wife, seventeen-year-old Catherine Howard, a mischievous beauty who ignites the passion of both the King and his chamber groom, setting up a deadly love triangle. Spun into a midlife crisis, Henry remarries and embarks on a war with France to capture Boulogne and symbolically recapture his youth. At home, the battle between Catholics and Protestants escalates when Henry's beloved sixth wife is charged with heresy… Now Henry, in his growing madness, must determine her fate while securing the legacy of his magnificent reign!

The DVD contains all 10 episodes from the fourth and final season and is available on DVD for £29.99 RRP and Blu-ray for £39.99 RRP. Loaded with never-before-seen extras, bonus materials include the in-depth featurettes - Illicit Affairs: Secret Romance in Henry's Court, The Tudors After Henry: The Royal Children of Henry VIII and Farewell to the King: Michael Hirst on "The Tudors" finale.

Season 4 will also be available to buy as part of The Tudors Seasons 1-4: The Complete Series DVD box set, including all four seasons of heart-pounding action and edge-of-your seat intrigue in this critically-acclaimed series that redefined historical dramas. The box set includes an exclusive bonus disc with special features and the in-depth featurettes - Reviving History: How the cast and crew brought an old familiar story to a modern audience Henry's Wives Club: A look into the women who made King Henry VIII infamous and Tracking The Tudor Dynasty: A complete look into the actual dynasty timeline - plus bloopers, deleted scenes and much more!

SEASON 4 SYNOPSIS:
With his brief marriage to Anne of Cleves annulled, King Henry VIII immerses himself in a new relationship, this time with the teenager Catherine Howard. While Katherine's arrival is marred by the loathing of Henry's daughter, Lady Mary, and dogged by the shadows of her own amorous past, England's king faces a bloody religious reformation, an uneasy relationship with Scotland, and intrigue within the royal court fuelled by those with designs on the throne. As Katherine's infidelity and failure to produce a son sentences her to an all-too-familiar fate, the King marries Catherine Parr (Joely Richardson) as England enters an ill-advised war with France that takes its toll on both Henry's fragile health and his army's strength. And as the showdown between Catholics and Protestants exposes religious fault lines across Europe, Henry's egomaniacal madness reaches new heights as his kingdom threatens to implode.

I cannot get past the intro to episode 3.  The picture freezes and even when I can get it to move, there is no sound for the remainder of the disk or on subsequent discs.  I have installed the latest firmware update for my LGH home cinema so I have assumed it is a probelm with the discs.  I have purchased and tried 3 copies - 2 from amazona nd 1 forom HMV - with exactly the same results!  anyone else had this problem?
posted by GregB on 5/4/2011 08:42