DVD
The Two Ronnies: Series One

DVD
At Last Smith and Jones Volume One 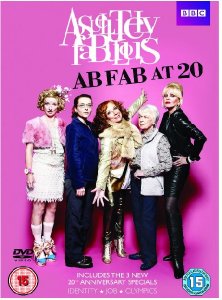 With a runtime of 90 minutes, and a recommended retail price of £15.31, extras will include the Absolutely Fabulous Sport Relief Special and a behind-the-scenes featurette of the aforementioned charity piece.

Behaving as outrageously as ever! 20 years after Eddy, Patsy, Saffy, Bubble and Mother first staggered into our lives, they return for three fantastic episodes Patsy might be hiding a few more wrinkles, Eddy's designer outfits are a size (or three) bigger, but the ageing fashionistas have lost none of their appetite for living it large, regardless of how ridiculous they look.

In these hysterical episodes, Saffy's new best friend forces Patsy to finally reveal her age - to the nearest decade or two; Eddy signs up a legendary French actress for an Albert Hall performance, but can she sing? And, as London goes Olympics mad, someone rather important (Hollywood, darling) rents the house as the ladies undertake some gold medal schmoozing.