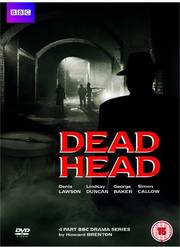 The DVD format never ceases to amaze us, you'd think everything would already be out on it, but no. Some distributors, like Eureka Entertainment constantly surprise us with blasts from the past, and today is no exception.

For the first time ever, on any home format, we will get to enjoy the never-repeated BBC noir drama series Dead Head, out on DVD this coming 15th April. Written by Howard Brenton and directed by Rob Walker, this stars Denis Lawson, Don Henderson, Howard Brenton, George Baker, Simon Callow and Lindsay Duncan.

The two disc special edition contains 50 minute episodes, and a total runtime of 191 minutes across two discs, no we can't work the maths out either. In it's original full frame aspect ratio, the recommended retail price will be £20.42.

London based petty crook, Eddie Cass agrees to pick up a package and courier it across the capital. When nobody answers the door at the drop off address Eddie opens the package and finds a woman's severed head in a hatbox. He panics and dumps it in the River Thames.

Returning home Cass is kidnapped by the mysterious Eldridge and his heavies who inform Eddie that he has been framed for the murder. The hatbox belonged to his ex-wife and his fingerprints are all over it. Eddie panics and goes off the rails, boozing and sleeping rough. Eventually he ends up at his ex-wife Dana's house.

Whilst he sleeps there, his former partner informs on him, and Eddie once again has to go on the run. The next morning the newspaper headlines reveal the discovery of the gruesome hatbox. Eddie's own private atom bomb has gone off.