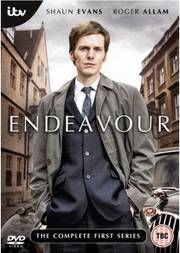 There was a certain golden period of crime drama which revelled in the sort of fast and loose approach to police work that the boys in blue were allowed to take, you know, before suspects taking an accidental tumble down some stairs on the way to the station became a bad thing.

So it's sort of not unusual these days, since enough time has past between the last decade where that sort of thing happened, to make a period piece which either rejoices or looks down upon the old ways of the humble copper.

We aren't exactly sure which of those this is, but ITV Studios Global Entertainment are releasing Endeavour: The Complete First Series on DVD this coming 6th May.

Yes, if you haven't already guessed it, this is a prequel series to the Inspector Morse franchise.

Dark family secrets, a terrifying battle of wits against a diabolical serial killer, a Royal visit to a local munitions factory and the shadow of London's gangland over Oxford. All will threaten to test Endeavour’s deductive skills to breaking point.