First series of Facejacker arrives on DVD this May 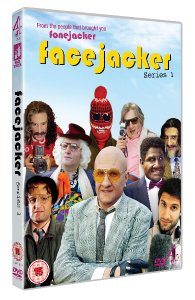 From the creators of the BAFTA award-winning Fonejacker comes a brand new show; Facejacker, which is available to own on DVD on Monday 17th May from 4DVD.

Kayvan Novak once again plays the man of mystery, but this time he gets up close and personal with his subjects rather than on the end of a phone.

The DVD will include a host of unseen bonus material and fans will also have the chance to own the entire collection, with the Fonejacker series 1, 2 and Facejacker boxset available to own on the same day.

Disguised with the aid of prosthetics, Kayvan plays a dazzling multitude of fictional characters in Facejacker, some familiar and some brand new, including: the charismatic and many times divorced car salesman, Terry Tibbs; scamster Augustus Kwembe, who hypnotises people to stop smoking but is really eliciting their bank details; and irritating complaint monger, Dufrais. All are thrust into real-life situations where they butt up against unsuspecting members of the public.

Facejacker takes Fonejacker to another dimension and showcases Kayvan Novak's amazing array of voices and characters as well as his sublime comic improvisational skills.

In Series 1 and 2 of Fonejacker, we see Kayvan Novak addicted to making prank telephone calls and taking on the guises of various characters to ensnare his victims. This is all conveyed through a specially created stylish visual narrative that accompanies the calls using animation, stills and filmed footage of the victims and the Fonejacker himself at work.