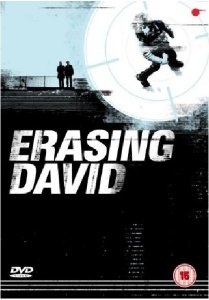 
AVAILABLE ON DVD FOR THE FIRST TIME FROM DECEMBER 6TH

"A riveting exposé of our digital age that plays like a Hitchcockian thriller - both chilling and very funny."- Sunday Express

"Breezily succeeds in showing how an individual's right to privacy has been jeopardised in our brave new digital world." - Total Film


David Bond's much talked about documentary Erasing David takes a chillingly insightful look at the rapid speed at which our privacy is being eaten away in an increasingly advanced surveillance society. Erasing David will be available on DVD for the first time from 6th December through Drakes Avenue Pictures.

We live in one of the most intrusive surveillance states in the world. Once the bastion of freedom and civil liberties the average UK adult is now registered on over 700 databases and is caught daily on one of the 4 million CCTV cameras located on nearly every street corner in the country.

Filmmaker David Bond decides to find out how much private companies and the government know about him by putting himself under surveillance and attempting to disappear - a decision that changes his life forever. He will leave his pregnant wife and child behind and put himself under surveillance for thirty days. The UK's top Private Investigators are hired to discover everything they can about him and his family - and track David down as he attempts to vanish. Is it still possible to live a private, anonymous life in the UK? Or do the state and private companies already know too much about ordinary people?

On a journey that sees him hounded across Europe, unable to use his credit card, mobile phone or internet, David soon discovers some alarming truths about what the government and private companies already know about ordinary citizens. From Stasi victims to human rights lawyers he meets a succession of people who have been caught in the crossfire of the database state.

Forced to contemplate the meaning of privacy - and the loss of it, Erasing David will leave you in no doubt that although we may have nothing to hide, we certainly have something to fear.