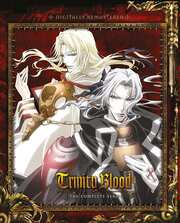 This autumn and winter, MVM are going back to four Gonzo classics and giving them the Blu-ray treatment. All four shows come from that period when anime was mostly being animated at 480 lines NTSC resolution, which means that the Blu-rays are going to be scaled up by default. Also, these shows are from relatively early in the BD scaled up anime cycle, when more post-processing, DNR and sharpening was being used than was healthy for anime. If we were in the US, it would be easy to say that holding onto the DVDs would be the obvious choice, but we’re in the UK, where the original DVDs were NTSC-PAL standards conversions, with a whole lot of ghosting and interpolation artefacts. I’d say that you’re pretty safe in opting for the Blu-rays at this point, as they would have to be spectacularly bad to be worse than original UK DVDs, but that has happened on a couple of occasions, which makes revisiting Trinity Blood on Blu-ray worthwhile, just to check. 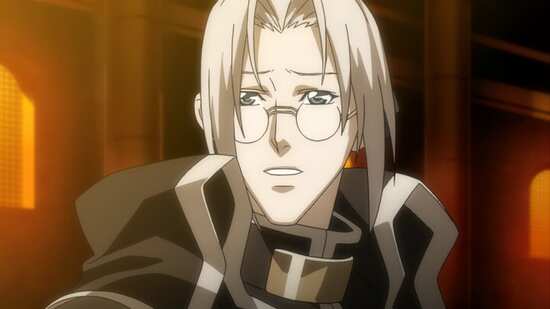 When I began this set of four reviews, four Gonzo shows that MVM are upgrading to Blu-ray, I made mention of the Gonzo production line, churning out shows with similar structures and audience demographics, albeit adapted from, or created with different stories and characters. They’d still be mash-ups of sci-fi, action, comedy, maybe a bit of romance, cyberpunk, drama and a whole lot of mystery and conspiracy, with plenty of explosions along the way, all leading to a climax that sees them throw everything at the screen. It was a formula established by Kiddy Grade, and one which Gonzo really relied on almost exclusively. They had varying degrees of success, with shows varying from good to mediocre, with a couple actually transcending the formula to become classics. Then there were the other ones, which is where we come to Trinity Blood, a show which I had at the end of last year decided to remove from my re-watch cycle, having gotten as much as I could from the DVDs. And then MVM send me the check discs for the Blu-ray release... 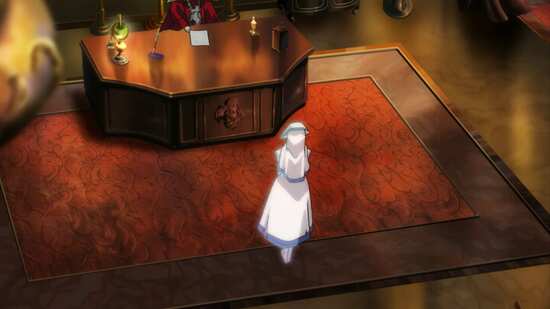 Being the self-destructive species that we are, we wind up bringing Armageddon down in the form of a global nuclear war. The survivors don’t have much chance to rebuild however, before visitors from above arrive looking to prey on this beaten people. In form and behaviour, they are identical to vampires of legend, and are dubbed as such by the humans upon which they prey. Centuries hence, civilisation has begun to rebuild, and while some technologies remain lost, humanity has regained some of its grandeur, travelling the skies in vast airships, and with the bulk of the political power resting with the Vatican in Rome. There are those among the Vatican hierarchy tasked with battling the vampire menace, namely the ‘AX’ group. Among them is priest Abel Nightroad, who is a Kruznik, a vampire that preys upon vampires. 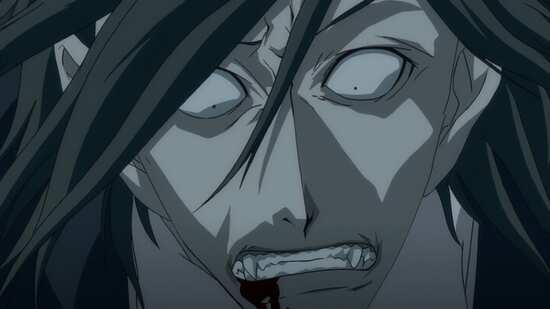 Twenty-four episodes of Trinity Blood are presented across three Blu-rays from MVM as follows. 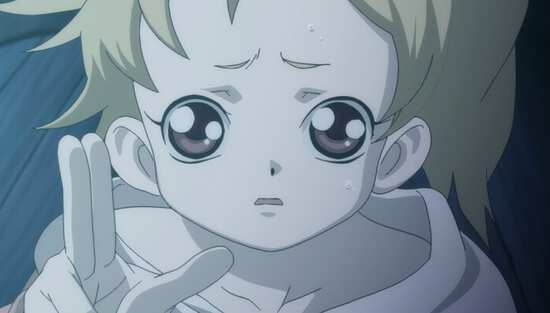 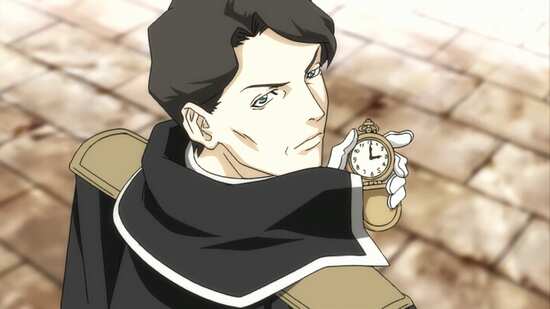 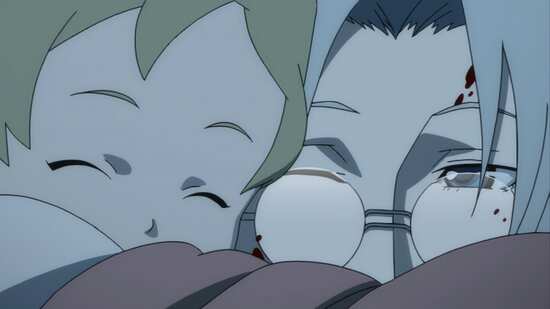 Trinity Blood gets a 1.78:1 widescreen 1080p transfer, and it’s an upscale of the original SD source. It’s also one of those up-scales that massage the image to make it look more like HD, so expect some DNR, some filtering, and sharpening of line detail. It still looks watchable enough on this release, better than some similar efforts from other such up-scales; thankfully smearing is not apparent, although there might be some loss of finer detail, and one or two moments of aliasing. If this was a toss-up between the Blu-ray, and the original Region 1 SD DVDs, I might suggest thinking twice, but given that you’ll probably be comparing it to the Region 2, NTSC-PAL standards converted DVDs, then it’s a no-brainer to choose the Blu-rays. In aesthetic respects, this is a fairly run of the mill Gonzo effort when it comes to the character designs, and the inventiveness with which they realise this future dystopian vision, looking good but never really impressing. 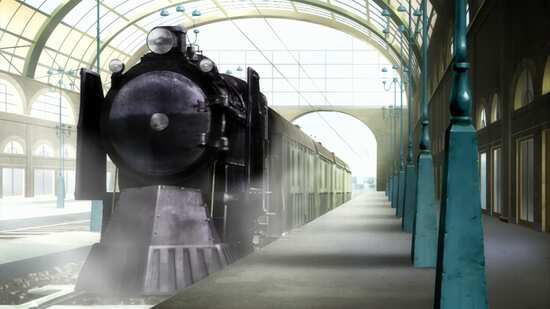 You have the choice between Dolby TrueHD 5.1 Surround English, and 2.0 Stereo Japanese with optional translated subtitles and a signs only track. Given the vintage of this transfer (Funimation released it in the US in March 2010), you won’t be surprised at the thin white font used for the subtitles, easy to lose against busy backgrounds. The subtitles are accurately timed and free of typos though. The dialogue is clear, and the theme tunes are catchy enough, but the incidental music in the show rapidly gets tedious and repetitive. 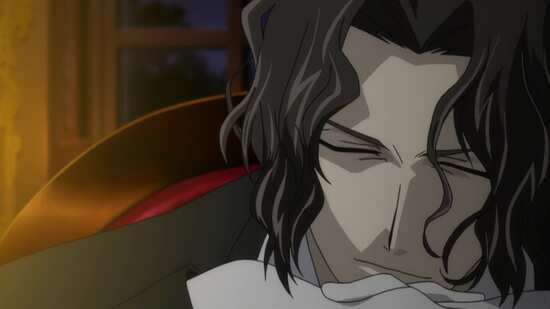 The discs present their content with animated menus, and the sole extras are on disc 3 where you will find the textless credits, and 42 pages of glossary, busting the show’s jargon. 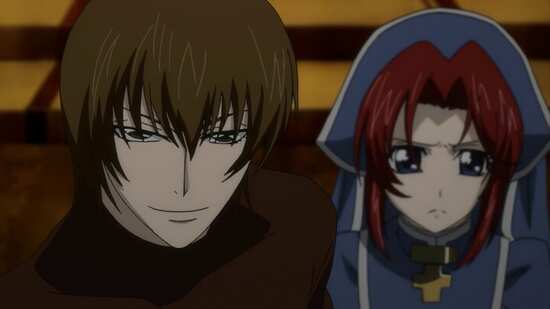 This is the seventh time I’ve watched Trinity Blood since the original 2007 UK DVD release. And were I to give my opinion at this point, it would paint a wholly different picture of the show, and it would be unfair to fans that are piqued by the Blu-ray release and want to experience it for the first time. Let’s face it, this isn’t a show with long-term shelf viability. So if it is your first time with Trinity Blood, I’ll point you to my first time with Trinity Blood, and link to the original DVD reviews below, as well as David Beckett’s boxset review so you can get a fairer opinion. 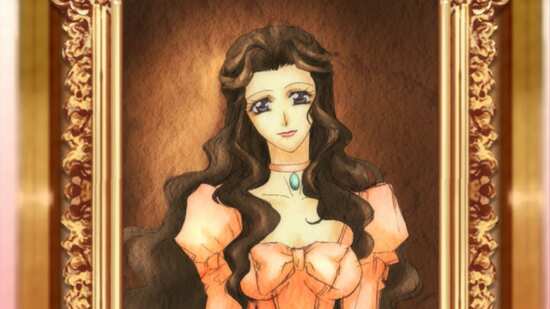 But if like me, you’re watching Trinity Blood for the seventh time... well, I can’t really say that I watched it, given that I slept through a fair bit of it. There are some shows that I can watch again and again without reservation, shows that are good enough to warrant repeat viewing. Trinity Blood isn’t one of them. Unfortunately Trinity Blood was always a non-starter. I suspect that Gonzo massaged the story a little too much to make it fit into their template, and then there was the tragic bad luck, in that the author of the original light novel series, Sunao Yoshida died in 2004, the year the anime was produced. Even if the adapted story was enough to tantalise, Gonzo’s ‘throw everything at the screen’ contrived conclusion is in no way satisfying. 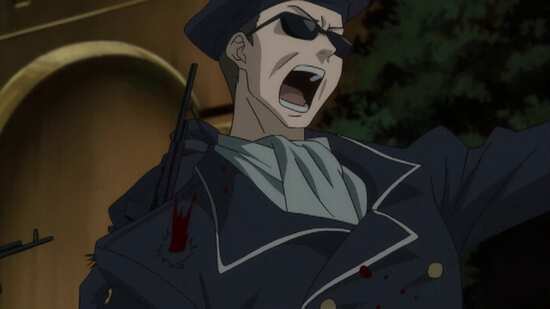 One problem I have with the show, and which constantly bugs me is the background to the story, the relationship between Abel and Cain (seriously original naming convention there) and their shared back story, which is nigh on identical to the back story between Vash and Knives in Trigun. It doesn’t help that Abel’s Japanese voice actor, Hiroki Touchi seems to be doing his best Masaya Onosaka (Vash’s voice actor) impersonation for the duration. 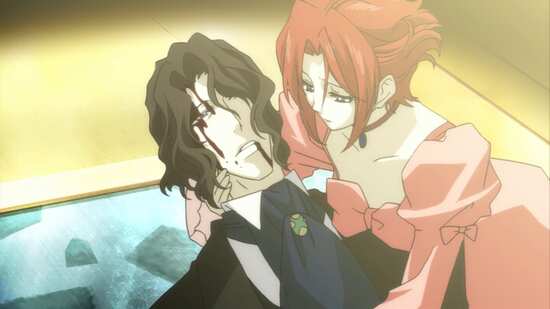 Like so many shows of this ilk, you really need to be invested in the characters and the world to make the most of it. It conforms more than most to the Gonzo archetype, mashing up a whole bunch of genres, action, sci-fi, comedy, with some steampunk/cyberpunk imagery. Behind it all is a big mystery, which in better shows would be uncovered at a realistic and gradual pace, but here gets more of an info-dump at the end of the series. But if you can’t invest in the show any more, then it comes across as a big pile of mythnobabble, laden down with jargon and series specific buzzwords that demand that glossary in the extras, and quickly turns to tedium inducing white noise as you watch it. 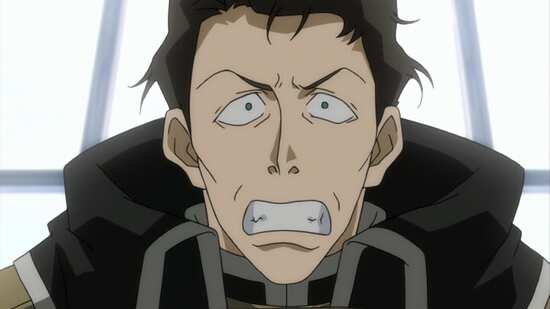 After seven times watching the show, I still have no idea what happens in the conclusion, an incomprehensible mess of an ending topped off with an inexplicable final scene. The more you watch the show, the more the admittedly upbeat and energetic beginning to the story becomes tainted by what you know is to come. I’ve become more and more reluctant to watch Trinity Blood each time, leading me to put the DVDs on the ‘never again’ pile, only for these Blu-rays to show up for review. 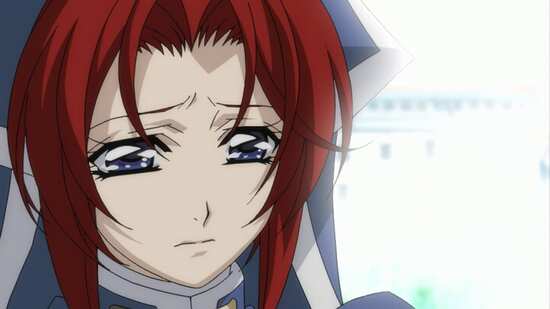 There is some entertainment value to be had in Trinity Blood, especially if you’re comparatively new to anime as a medium, and more importantly, if you’ve never seen the show before. But it was never a show I was enthusiastic about to begin with, and it certainly hasn’t aged well for me. The Blu-rays do present the show well enough if you’re still interested after all that.