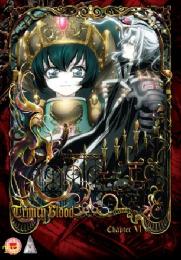 I'm often looking to be challenged by what I watch, new ideas, complex storylines, and innovative visions, basically something that I haven't seen before. That's no less true with anime. That doesn't mean of course that I'm averse to some mental chewing gum, the odd summer blockbuster, something with big frakkin' explosions. That's where Gonzo comes in, at least when it comes to anime. They have got the animated equivalent of the popcorn movie down to a fine art. They can present great concepts and neat little story ideas, dress them up in the finest animated livery, add oodles of action, some stock characters and situations and serve it all up in a neat twenty-minute package. It doesn't matter if it all looks vaguely familiar, as it is just so much fun to watch. This week even my lowered expectations have taken a battering from the final volume of futuristic vampire anime Trinity Blood.

Being the self-destructive species that we are, mankind winds up bringing Armageddon down in the form of a global nuclear war. The survivors don't have much chance to rebuild however, before visitors from above arrive looking to prey on this beaten people. In form and behaviour, they are identical to vampires of legend, and are dubbed as such by the humans upon which they prey. Centuries hence, civilisation has begun to rebuild, and while some technologies remain lost, humanity has regained some of its grandeur, travelling the skies in vast airships, and with the bulk of the political power resting with the Vatican in Rome. There are those among the Vatican hierarchy tasked with battling the vampire menace, namely the 'AX' group. Among them is priest Abel Nightroad, who is a Kruznik, a vampire that preys upon vampires.

The final volume of Trinity Blood concludes with four episodes. 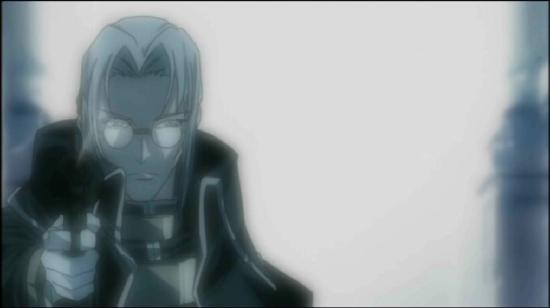 21. The Throne Of Roses II. The Refuge
In the previous volume, the Pope and his entourage had travelled to Albion to attend the coronation of a new monarch. However, the power vacuum at the head of the state had opened the opportunity for insurrection, as the downtrodden Methuselah population had rebelled against their Terran overseers, and they tried to take the Pope hostage. As we begin this volume, AX and the Inquisition have been sent in to rescue the pontiff as well as his escort Esther. While the search continues, the young Pope wanders the catacombs, and learns of the Methuselah population's straits, slaving for the Albion people. What seems like a simple rebellion becomes confused when the Rosen Kreuz Orden intervenes. Esther is soon captured, while Auto Jagers roam the underground tunnels, preying on both sides.

22. The Throne Of Roses III. Load Of Abyss
It's about this time in the series that the big bad villain usually makes his appearance, and quite poetically, it turns out that there is a Cain to the heroic Abel. Cain is a priestly figure, all dressed in white that has no qualms about ripping his way into the palace and the catacombs. Humans, vampires, walls and steel, it's all the same to his psychic powers, and while the heroic rescuers manage to locate and retrieve the Pope, keeping him safe from the undead menace, Cain is looking specifically for Abel.

23. The Crown Of Thorns I. City In The Mist
Esther is grieving, while Cain gloats. A massive Orden ship appears over Londinium and starts blasting the populace at random, preparing the Earth for a new world order, while the plucky defenders rally to save the world.

24. The Crown Of Thorns II. The Load Of Oath
The conclusion… 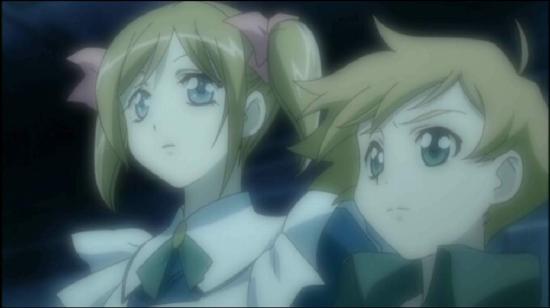 Studio Gonzo practically guarantees eye candy and visual splendour, and that is just what you get with this series. The 1.78:1 anamorphic transfer is all present and correct, it's clear and sharp for the most part, and brings across the splendid set and character designs with ideal clarity. Like all modern anime, Trinity Blood proves to be a dynamic blending of traditional 2D and 3D CGI animation. You'll probably still notice the odd compression artefact around fast motion, but it isn't enough to detract from the viewing experience. 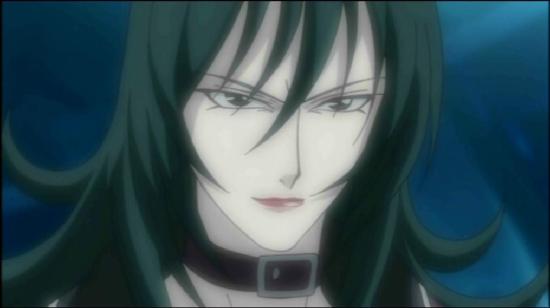 As usual for an anime disc, you get a choice of DD 2.0 Japanese and DD 5.1 English, with optional translated subtitles as well as a signs track. If you want the surrounds to give you the best action experience, then English will be the way to go, but as always, I opted for the original Japanese track. The dialogue is clear and the theme songs are nice and catchy.

You get the textless credit sequences, and trailers for Black Cat, and Witchblade. A little bonus on this disc is the 4-minute slideshow gallery, that showcases some Trinity Blood artwork, and that's your lot. 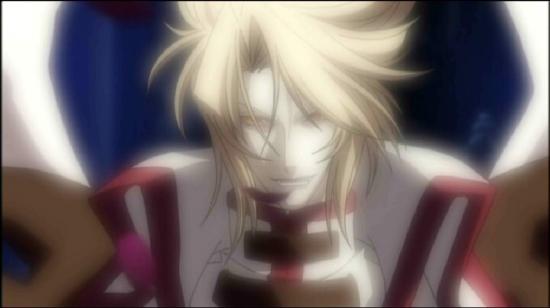 What just happened? What the hell just happened? I feel like I've been mugged. You know that feeling you get when you leave the kids with a colouring book and a box of crayons while you pop out to make a cup of tea, only to return to find blood dripping down the walls, the stench of brimstone and vomit, and the antichrist in your sofa babysitting? That's what this final volume of Trinity Blood is like. I left it at volume 5 a couple of months ago, not exactly the most impressive anime ever, but ticking over quite nicely, then along comes volume 6 and finishes it off with a car wreck that would put James Dean to shame.

To be fair, Trinity Blood never stood out as an exemplar of the anime medium. It was your typical Gonzo eye-candy fest, preferring style over substance, and never bothering with something so cumbersome as exposition when a couple of pretty explosions would suffice. It had two things going for it though. One was energy, the sheer pace and vitality of the show that made it easy to watch. It never got bogged down, and rarely gave the viewer time to reflect on its weaknesses. The second thing was its premise, underdeveloped though it was. There was something about the future world that it portrayed that gave the impression that someone had actually put some energy into thinking it up. A post-apocalyptic world where humans live side by side with vampires in an uneasy truce, a third party looking to disrupt things, a futuristic world where old exists side by side with the new, and a newly resplendent Vatican one of the major superpowers. It could have been such compelling stuff. 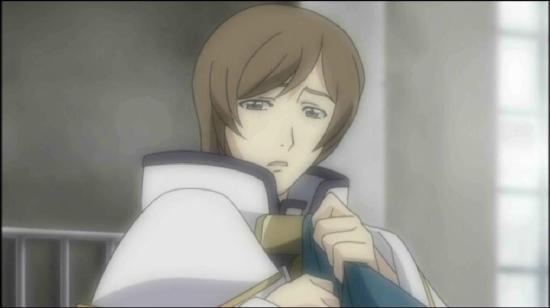 Unfortunately, Trinity Blood never went anywhere interesting with this. Instead it took what it had, and just tried adding to it, throwing random ideas at the screen, as well as introducing more and more characters in the hope that something would stick, and for the most part it worked. The series was structured in the form of mini-arcs, little two or three episode stories that would introduce a new set of characters, a villain of the week, a problem to resolve, and it would do so in an entertaining and colourful way. All the while in the background there would be some machinations going on with the Rosen Kreuz Orden, the series big bad, but never enough to really impinge on the main story. While that was going on in the first two thirds of the series, Trinity Blood remained fun to watch. But as we came closer and closer to the climax, it became apparent that the haphazard approach to plotting wouldn't work, that at some point the creators would have to sit down and plot out a final arc that would truly introduce the Rosen Kreuz Orden, tell their story, establish their motivation and their relationship to the show's protagonists, and resolve all that in a sound and satisfying narrative.

That never happened. Instead they just intensified their 'hit it and hope' mentality, throwing idea after idea at the screen, filling the story with more and more ephemeral characters, and praying that the audience would ignore the gaping deficiencies and be distracted by the pretty colours. Well, not this guy. The final volume picks up where the previous one ended, and for a while it looks as if Trinity Blood will sputter to a conclusion following the Methuselah rebellion in Albion and the crowning of the new monarch. Instead, three episodes from the end, all of that is put on hold with a fart of a resolution, to introduce the true villain of the piece, Cain. Naturally Cain is Abel's evil brother, Knives to his Vash, and he moustache twirls his way onto the scene to do away with our hero. But don't worry fans, as keeping with the biblical theme, there is a resurrection imminent, accompanied with plenty of flashbacks to when Cain and Abel were kids, explaining their Kruznik natures. The ending then goes like this (Sorry about the spoilers, but you really need to be warned before you watch it) Big climactic battle, Esther opining that the battle will be eternal, Cain and Abel falling from the sky, beams of energy going all over the place, suddenly we're in low earth orbit watching a sunrise, switch to scene of coronation, end credits, epilogue with Abel and Ion on a moon sized space-ship heading to another world?!?!? 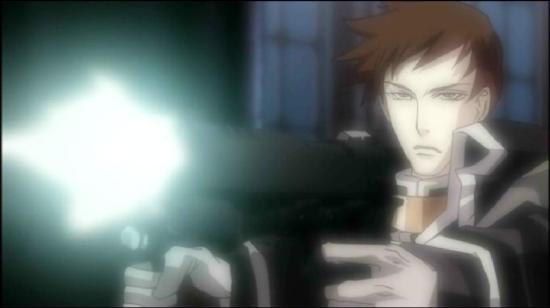 It makes absolutely no sense whatsoever. And as per action anime conventions, matters are complicated even further by having every character encountered in the anime thus far showing up to put their two cents worth of dialogue into the final episode. This is what it feels like to have your suspension of disbelief raped. I haven't seen an anime end so badly since Legend of the Four Kings and its 'It was all a dream' copout.

If you have enjoyed Trinity Blood, and there is much to enjoy about the series, then this final volume will make the Sopranos finale look like genius. The trouble is that with a finish like this, you're left remembering all the low points of the season, all of the show's flaws and imperfections. It certainly doesn't sell the series any, but if you watch it with low enough expectations, it may mean that you don't bin all six volumes in disgust. I need to rinse my brain out now.