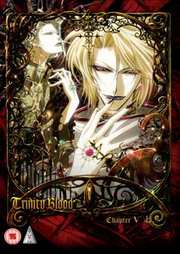 I`m often looking to be challenged by what I watch, new ideas, complex storylines, and innovative visions, basically something that I haven`t seen before. That`s no less true with anime. That doesn`t mean of course that I`m averse to some mental chewing gum, the odd summer blockbuster, something with big frakkin` explosions. That where Gonzo comes in, at least when it comes to anime. They have got the animated equivalent of the popcorn movie down to a fine art. They can present great concepts and neat little story ideas, dress them up in the finest animated livery, add oodles of action, some stock characters and situations and serve it all up in a neat twenty-minute package. It doesn`t matter if it all looks vaguely familiar, as it is just so much fun to watch. This week I have been getting all penultimate with the fifth volume of futuristic vampire anime Trinity Blood.

17. The Night Lords III. The Island Off Her Darling Children
In the previous volume, Esther and Abel had accompanied Ion back to Byzantium as emissaries of peace, but walked straight into a deep conspiracy that threatened the Empress. Add to that Ion being framed for his grandmother`s murder, Esther injured while investigating, and things now seem bleak for our heroes. As Esther heals, Ion is determined to clear his name and save his honour. But he is confronted by his former right hand man Radu, who tells him that the Empress` days are numbered, and the Rozen Kreuz Orden will issue in a new world order. Ion`s grandmother is about to be laid to rest, and when the Empress attends the funeral it will be the perfect opportunity.

18. The Night Lords IV. The Palace Of Jade
The ceremony commences, and Ion races to prevent the assassination. His impetuous actions backfire when Radu captures him. The Empress prevents a summary execution, but Ion and Esther are imprisoned, and Abel and Asta watch on, powerless to act as the conspirators` plans unfold in the mausoleum. The Empire is thrown into confusion, and all they can do is attempt to rescue their young friends. Ion and Esther have more immediate problems. Radu, who has a sick game to play with them, confronts them in their captivity, but there is more to Radu`s betrayal than meets the eye.

19. The Night Lords V. A Start of Pilgrimage
Ion and Esther are in dire straits, and it looks as if one of them is destined to die, unless help arrives. Asta goes to the palace to uncover the conspiracy and confront those responsible, even as they prepare to usurp the throne. Abel Nightroad has business with Radu, but at a critical juncture in their confrontation, his nano-machines and Krusnik nature fail him.

20. The Throne Of Roses I. Kingdom Of The North
Queen Bridget of Albion has died, leaving no heir, and the making a delicate political world situation practically precarious. It would be a good time to cement ties with the Vatican, especially now that the Vatican and the Empire are building bridges, and to that end, the young Pope and Esther are invited to attend the funeral. As part of the visit, Count Virgil Walsh of Manchester (expected to ascend to the throne) offers to show them around Albion`s pride and joy, the Lost Technology factory. The papal visit is the trigger for an insurrection however, as a faction led by the Count`s own sister within the underground factory look to overthrow the status quo. When the Pope and Esther as reported as missing to the Vatican, Abel, The Professor and Dandelion, along with Petros and Paula of the Inquisition are sent to recover them 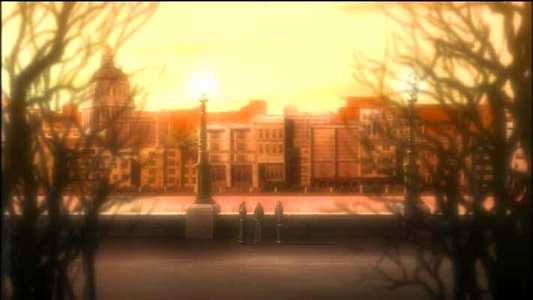 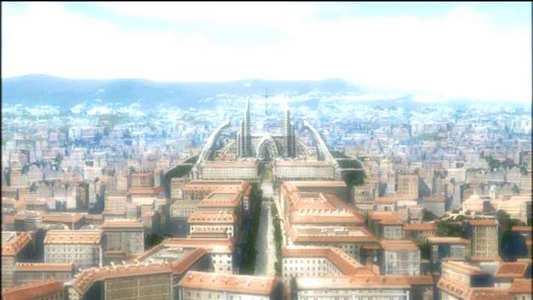 As usual for an anime disc, you get a choice of DD 2.0 Japanese and DD 5.1 English, with optional translated subtitles as well as a signs track. If you want the surrounds to give you the best action experience, then English will be the way to go, but as always, I opted for the original Japanese track. The dialogue is clear and the theme songs are nice and catchy. 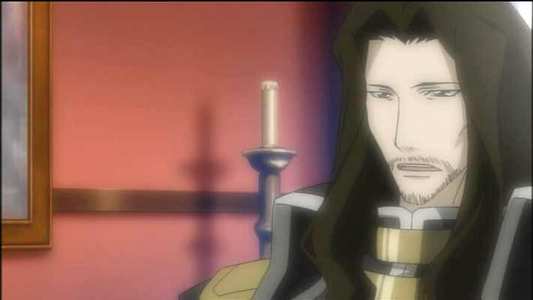 You get the textless credit sequences, and trailers for Ah My Goddess TV, and Ergo Proxy. The multi-angle credit sequences are a thing of the past, and we`re left with the inferior looking, but more informative English credits. 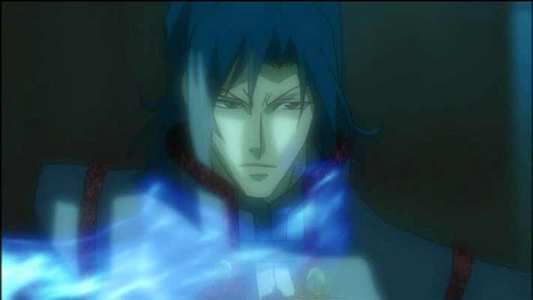 As befits a series racing headlong towards a conclusion, things really begin to come together in the penultimate volume of Trinity Blood. The Night Lords arc turns out to be the longest in the series thus far, and we continue to develop the relationship between Ion and Esther, as well as get a look at the aristocracy of the Empire, the machinations of the Rozen Kreuz Orden, as well as get some delicious back-story for Abel Nightroad. With that done, it`s off to good old Blighty for what looks like the concluding arc of the series. It`s a view of Blighty a few hundred years down the line of course, re-christened Albion, and a rather stylised view at that. Where Trinity Blood has excelled, and tantalised has been the bigger picture, the political relationships and the well-developed worldview, and this volume is the best so far in that respect.

The chase sequences of the previous volume are gone, as our heroes begin to uncover the conspiracy against the Empress, and work to prevent her assassination. Radu confronts Ion, and it looks like a cabal of nobles working against the Empress, but once again the conspiracy arcs back to the Orden. Esther and Ion`s somewhat forbidden relationship has been growing of late, and Radu plays on that by sowing seeds of distrust between the two. It comes to a head when the two are captured, and Radu engineers a game worthy of Saw to eliminate them. He awakens a blood-thirst in Ion, and gives Esther a silver blade with which to defend herself, the idea being that they kill each other in captivity. Yet Ion struggling to hold on to his humanity, and Esther no longer able to see Ion as just another Methuselah to be hated proves to be the strongest emotional moment of the series yet. The final confrontations and the revelation about the Empress and Abel after that is just the icing on the cake.

The final arc looks to be just as promising, playing even more strongly on Trinity Blood`s forte, that of political machinations and large outlooks. The Orden have been preying on mistrust between Terrans and Methuselahs, exploiting the political gaps that develop between nations, and with the passing of Albion`s Queen, it looks ripe for a series concluding climax of geopolitical proportions. Of course, one episode is barely enough to see, but the seeds of the finale are sown, with several of the prime players moved into place, and Esther and the Pope vanished. It certainly looks promising for volume 6.

Yet my reservations about Trinity Blood remain. It`s a series that seems in search of an identity, still unsure of where it is best positioned. It seems to take pieces of other anime shows at random and assimilate them into its own story, a mishmash of styles and approaches that invokes a wearying game of spot the reference in me. As we head into the final arc, we are definitely into Trigun territory. Earlier in the series, I lamented that Esther was introduced as a significant character, and then neglected for a number of episodes. Well in this volume it`s all Esther, and Abel Nightroad is practically a cameo. Once again, Trinity Blood offers the prospect of a broth that has had the attention of too many cooks. I don`t now think it has much to do with its hackneyed nature, as having recently been introduced to Witchblade, a show strongly reminiscent of Burst Angel, I noticed it still managed to find it`s own identity in the space of one volume, something Trinity Blood is yet to do after five.

Once again, if you`re relatively new to anime, especially Gonzo`s canon, then Trinity Blood is a good place to start, entertaining and brilliantly animated. But if you are something of an anime veteran, then this show may just leave you cold.