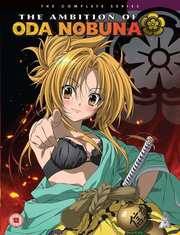 Yoshiharu Sagara is about to get a blast from the past
Certificate: 15
Running Time: 303 mins
Retail Price: £19.99
Release Date: 2015
Content Type: TV Series

Synopsis:
Yoshiharu Sagara thought he knew his Japanese history backwards and forwards, but when he inexplicably finds himself in the past everything he thought he knew was wrong and he's in a very different history altogether! Not only is this timeline's version of the legendary (and very male) Oda Nobunaga now the cute (and very female) Oda Nobuna, but one of the first things Yoshiharu manages to accidentally accomplish is getting one of the Sengoku era's most important historical figures killed!

Still, when you're stuck in the past, have a semi-reliable knowledge of one possible future, and there's now a vacancy in the history books, what's your best present course of action? Aligning yourself with someone with the potential to become one of the most powerful warlords in any of Japan's possible histories might not be a bad start. Provided, of course, that you can keep yourself from becoming too intimately involved in the cloak and dagger action during a time when the cloaks cover body armor and the daggers are paired with multiple swords! But that's just part of the risk you assume when your history becomes her story!