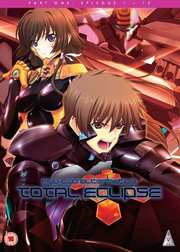 Synopsis:
In 1967, mankind encountered the hostile alien BETA and the Space Race became a Space War. Despite every measure thrown against them, the BETA made their first deadly landings on Earth in 1973 and by 1998, half of Eurasia has fallen. While the rest of the world stages desperate defensive battles across a thousand fronts, a brutally savaged Japan barely manages to hang on thanks to the support of the United States, the UN, and a new form of robot/jet hybrid known as the Tactical Surface Fighter.

But even as pilots and engineers struggle to develop the newest generation of advanced weaponry, the vestiges of the Cold War threaten to cripple the efforts of the defenders, with the surviving nations fighting to prioritize their own survival. At the eye of the gathering storm, the actions of 2nd Lieutenant Yuuya Bridges of the U.S. and First Lieutenant Yui Takamura, the sole survivor of a unit lost in the battle of Kyoto, may become the focus upon which the fate of all humanity depends.