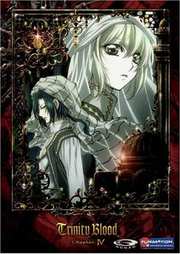 I`m often looking to be challenged by what I watch, new ideas, complex storylines, and innovative visions, basically something that I haven`t seen before. That`s no less true when it comes to anime. That doesn`t mean of course that I`m averse to some mental chewing gum, the odd summer blockbuster, something with big frakkin` explosions. That where Gonzo comes in, at least when it comes to anime. They have got the animated equivalent down to a fine art. They can present great concepts and neat little story ideas, dress them up in the finest animated livery, add oodles of action, some stock characters and situations and serve it all up in a neat twenty-minute package. It doesn`t matter if it all looks vaguely familiar, as it is just so much fun to watch. This week I have been letting my brain go numb with the anaesthetic delights of the fourth volume of futuristic vampire anime Trinity Blood.

13. The Ibelis II. Betrayal Blaze
At the end of the previous volume, trouble had erupted in Carthage when Caterina had visited to show the flag. The vampires had sent an envoy, Ion to negotiate with the humans, but misunderstandings had led to the Department of Inquisition being sent after him as some sort of terrorist. Now Esther and Abel are helping Ion and his loyal retainer Radu to escape. Betrayal awaits them though, as does the Chief of the Inquisition Brother Petros. Meanwhile his lieutenant Sister Paula has usurped Caterina`s authority and declared Martial Law.

14. The Ibelis III: A Mark Of Sinner
The Rozen Kreuz Orden is manipulating events in Carthage, they`ve infiltrated the Inquisition, and now Vatican airships that were searching for Ion are bombarding the city. They`ve also animated the corpses of vampires into an army of Auto-Jagers, bent on fomenting war between the Vatican and the Empire. Ion has to turn to his enemies for help.

15. The Night Lords 1. The Return of Envoy
Byzantium, shining capital of the empire, and home to the eternal Empress Augusta Vradica is the destination for our heroes. Esther has been appointed Vatican envoy and she accompanies Ion back home, along with Abel in tow. An audience with the Empress will impress upon her the Vatican`s desire for peace, but Ion`s return has been pre-empted. When he goes to greet his grandmother, the Duchess of Moldova, he finds her mansion has been ransacked and the Duchess murdered. It isn`t long before he is being framed for the crime. He wants to defend his honour then and there, but Esther and Abel convince him of the value of discretion. But whom can they turn to in an enemy city?

16. The Night Lords II. Twilight of the Capital
Asta has been told to expect the Vatican envoys, but she hasn`t been expecting them as fugitives. Nevertheless she assists them in trying to clear Ion`s name and she and Abel pay a visit to the palace for an audience with the Empress. They learn that events are moving far quicker than expected. Ion and Esther are supposed to lie low, but Ion has realised that the timing of the attack on his grandmother was too well defined. He must have been set up, and he takes Esther with him to track the traitor down. They are both walking into a trap though. 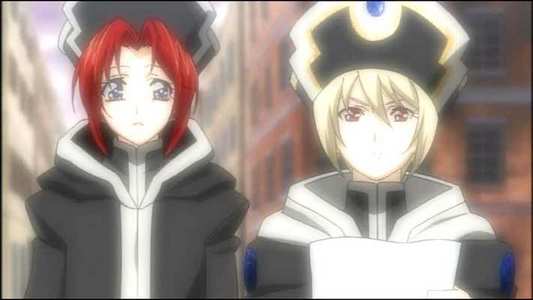 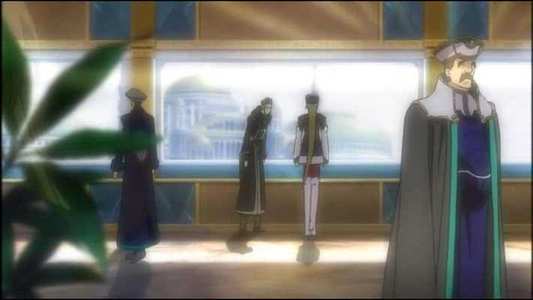 As usual for an anime disc, you get a choice of DD 2.0 Japanese and DD 5.1 English, with optional translated subtitles as well as a signs track. If you want the surrounds to give you the best action experience, then English will be the way to go, but as usual, I opted for the original Japanese track. The dialogue is clear and the theme songs are nice and catchy. The subtitles were back to normal for this volume. 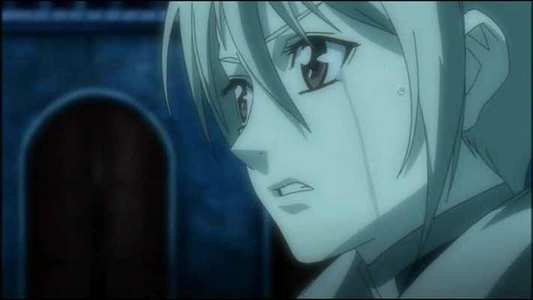 The episodes on this disc come with multi-angle credit sequences, and you`ll also find the usual jacket picture and animated menus. Textless credit sequences as well as trailers for Basilisk and Speedgrapher round off the bare minimum for an anime disc. 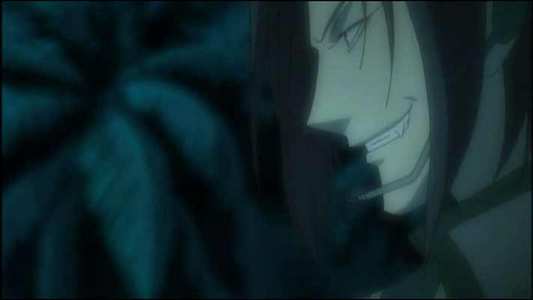 I don`t know what it is with Trinity Blood and myself. It`s got a decent enough story, inoffensive characterisations, and animation that sparkles with the usual Gonzo excellence. But it`s a series that has failed to excite me to any significant degree. It`s a show that is just there, it exists, it entertains, and then it vanishes from the consciousness, a wholly immaterial experience.

It`s volume 4 that really should change things though, as gone are the scene setting, background filling stories of the first half of the series, and in their place we start seeing the main story develop, the secrets of the show begin to be unveiled, and the characters begin to come good. We continue with the cliffhanger from volume 3, with the Empire`s young emissary now caught up in world-shaking events, as the dark organisation at the heart of conspiracies takes things to a higher level. It`s a game of cat and mouse over two episodes, as Ion attempts to deliver the Empire`s message to one who would hear, despite opposition from all factions. The only help he has is the unconventional priest Abel Nightroad, and Esther Blanchett. Whereas their initial meeting spoke of imminent bloodshed, we see a friendship form and grow between Esther and Ion, to the point where she is willing to protect him with her life.

It all bodes well for the second half of the disc, with Esther appointed Vatican envoy to the Empire, and sent to Byzantium with Ion and Abel. But the Rozen Kreuz Orden are ahead of them, and the final two episodes are almost a rerun of the first two, with the three made fugitives once again, sought by all sides. The friendship between Esther and Ion continues to deepen, we see the return of a familiar face from episode 11, and the story continues to twist and turn with shadowy plot developments galore. One of the most intriguing is that it turns out that Abel and the Empress have something of a history, but it`s shown in an odd moment that doesn`t quite fit into the story, although it will probably all make sense in future episodes. As is the way with these things, we end once more on a cliffhanger to keep us eager until volume 5.

But it`s still not ringing my bell. I think the problem is that familiarity breeds contempt, a truism no less apt for anime. Once you`ve sampled a good few series, then you`ll become familiar with the clichés, stock characters, recycled plots, and workmanlike scripting, all of which are present in Trinity Blood. It`s a mish-mash of shows that have come before, and it`s not as good as any of them. It really is a Hollywood summer movie of an anime, all flash and no bang. Experienced anime fans will find it all a little familiar, and if they aren`t in the mood for the equivalent of junk food, a little tiresome too. If you`re a newcomer to the medium though, Trinity Blood is a solid little action adventure series with a sci-fi bent, and it`ll give you a crash course in those clichés that will soon become so recognizable.