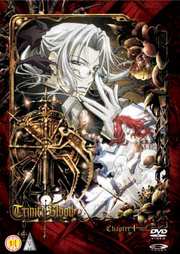 Not too long ago, I was pondering the latest Gonzo series to be released through the auspices of MVM, and commenting on the ubiquity of ninja in popular culture. I feel like taking that intro and repeating it verbatim, albeit with vampires instead of ninja, as yet another Gonzo series debuts on the MVM label. Sometimes it seems that every other anime series from Japan features vampires or variants thereof, and it`s one Western archetype that has been wholeheartedly adopted, albeit infused with some Eastern mythology as well. The thing about vampires is that their elegance and charm translates well to the anime art style, and that especially appeals to the female audience. When your villains are as beautiful as they are deadly, that adds a little extra frisson. Also, if your horror preferences tend towards the moody, atmospheric and stylish, as opposed to the splatterfests currently in vogue in Hollywood, then East is definitely the direction in which to look. There are blood and guts aplenty in Trinity Blood however, in addition to some seriously gothic styling. Vampires meet sci-fi in the latest offering from MVM.

Being the self-destructive species that we are, we wind up bringing Armageddon down in the form or a global nuclear war. The survivors don`t have much chance to rebuild however, before visitors from above arrive looking to prey on this beaten people. In form and behaviour, they are identical to vampires of legend, and are dubbed as such by the humans upon which they prey. Centuries hence, civilisation has begun to rebuild, and while some technologies remain lost, humanity has regained some of its grandeur, travelling the skies in vast airships, and with the bulk of the political power resting with the Vatican in Rome. There are those among the Vatican hierarchy tasked with battling the vampire menace, namely the `Ax` group. Among them is priest Abel Nightroad, who is a Kruznik, a vampire that preys upon vampires.

This first disc of Trinity Blood kicks off the story with four episodes.

1. Flight Night
An airship travelling from Londinium to Rome one night may seem like a ripe target, and it`s one that vampire Alfred, Count of Mainz doesn`t miss up. Soon the young Pope has an ultimatum on his hands, free Alfred`s fellow vampires of the Fleur de Mal group, or face having the Vatican destroyed by a runaway airship. The pope`s counsellors advise that he forfeit the airship`s crew and passengers and have the vessel destroyed. Fortunately there is another option, priest Abel Nightroad is travelling on the airship, and he is in a position to resolve the crisis. But there are those in the Vatican who lack patience.

2.Witch Hunt
Abel Nightroad and his android colleague Tres are following up on the Fleur de Mal, when they come across a scene of carnage, fifteen vampires dead in an orgy of mutual annihilation. The only survivor is a little girl names Elis. It immediately becomes apparent that she isn`t all that innocent when she touches Abel and induces a vision. She is a touch telepath wanted by the Inquisition, and her powers resulted in the massacre when she turned on the vampires. Abel wants to help her, but Tres has orders to destroy her the minute she poses a danger to the church. The two priests wind up in conflict over the issue, which is just enough time for a vampire to pounce.

3. The Star of Sorrow (1. City Of Blood)
The city of Istvan lies on the border between the human and vampire realms. Itself ruled by a vampire named Gyula, Marquis of Hungaria, there is an uneasy truce between the two people, and the church isn`t particularly welcome. Abel Nightroad arrives to search for the Star of Istvan, and finds himself under arrest. It`s only long enough for Gyula to lay down the law however, and when Abel is released, he learns that all is not well for the church in Istvan. The Bishop has been murdered, and her adopted daughter, Sister Esther is eager to take revenge against the vampires, and has enlisted the aid of Gyula`s aide Dietrich to that effect.

4. The Star Of Sorrow (1. Hunter`s Banquet)
Vengeance begets vengeance. While Esther wants to avenge the fallen bishop, Gyula wants to do the same for his wife Maria, a humanitarian of a vampire who was murdered by the very people she sought to help. To that end, Gyula has perverted the purpose of an ancient technology to target his enemies, The Vatican and the humans they represent. Abel has to resolve this, but the Vatican has pre-empted him and launched a full-scale invasion of Istvan. 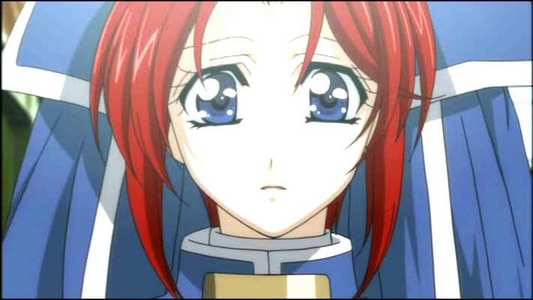 Studio Gonzo practically guarantees eye candy and visual splendour, and that is just what you get with this new series. The 1.78:1 anamorphic transfer is all present and correct, it`s clear and sharp for the most part, and brings across the splendid set and character designs with ideal clarity. Like all modern anime, Trinity Blood proves to be a dynamic blending of traditional 2D and 3D CGI animation. There are one or two scenes, especially early on, where the 2D animation isn`t up to the standards of the set design, looking simplistic and static, but it`s a rare occurrence.

Where this first volume of Trinity Blood falls down is with the action sequences. Moments of dynamic motion, or rapid image change (such as lightning effects, explosions or fire) result in compression artefacts. It`s almost blocky pixellation at times, and I did find it distracting, no matter how into the story I was. Also there is a brief pause in playback at the end of the multi-angle credit sequences on my player, which I found odd. 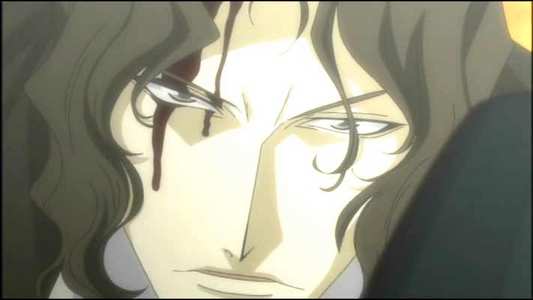 A usual for an anime disc, you get a choice of DD 2.0 Japanese and DD 5.1 English, with optional translated subtitles as well as a signs track. If you want the surrounds to give you the best action experience, then English will be the way to go, but as usual, I opted for the original Japanese track. The dialogue is clear and I quite like the music for the theme songs. This is one show where the difference between dub and sub is immediately apparent. In the English dub, the foes are specifically described as the vampires of old legend, while the subtitled Japanese version implies that they are aliens who resemble vampires of legend. It`s a subtle distinction that may not even matter in the long run, but the difference is there. I`m also not too keen on the dub voice for Abel Nightroad. 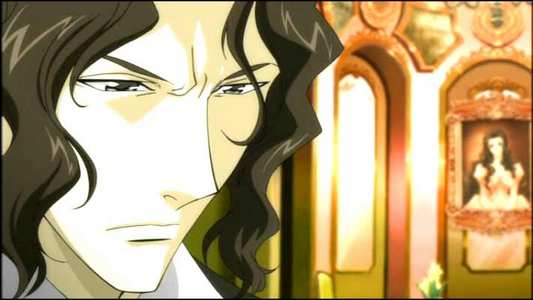 As already mentioned, the episodes on this disc come with multi-angle credit sequences, and you`ll also find the usual jacket picture and animated menus. Textless credit sequences as well as trailers for Speedgrapher and Ergo Proxy round off the bare minimum for an anime disc.

Specific to the title is a Gallery of Tarot Cards, 26 pieces of line art featuring the show`s characters in their own tarot deck. 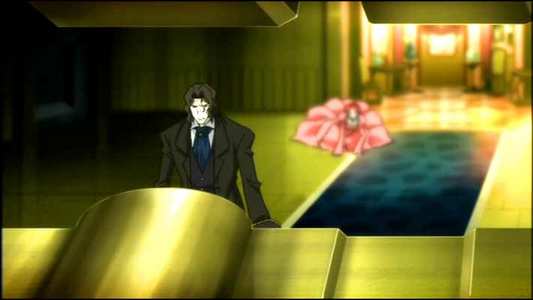 I don`t mind the occasional vampire, I loved Buffy, but the sort of moody gothness of Anne Rice will have me running for the hills. I usually sit down with a new vampire title with my fingers crossed, and not to ward them off. But Trinity Blood begins with a whopping great mushroom cloud. We`re into post apocalyptic sci-fi territory, a genre that I was raised through a cold war to appreciate. Trinity Blood has an interesting set up, intriguing characters and a visual style and action flair that is very easy on the eyes. I thoroughly enjoyed these opening four episodes, although I did feel a nagging familiarity.

There`s something of the Trigun about Trinity Blood, with its post apocalyptic society clawing its way back up from the ashes. We see a vaguely familiar world, although this is one modelled more on feudal European rather than Western archetypes. The main protagonist is very much like Vash the Stampede, in that he shares the same dichotomy of character. He has the same playful goofy side when interacting with people, but is also utterly ruthless when dealing with his foes, and it seems he also has a working knowledge of technology lost to the greater proportion of mankind.

But there the similarities end, as Abel Nightroad doesn`t at this point have a mysterious lost past to worry about, or an annoying pacifism to hamper his dealing with vampires. If there is any ambiguity to the character, it is still yet to come, as in the first episode we get a full knowledge of what Abel is capable of, and why he is considered a vampire`s vampire. There is more of an obvious political edge to this world too, with the first episode drawing parallels to the `war on terror`, with a vampire hijacking an airship, setting it on a suicide course, and demanding the release of his fellow vampires. This takes us into the internal politics of the Vatican, with a child Pope being dominated by his ministers, one a loud warmonger, and the pope`s sister Caterina who runs Ax and employs Abel as her right hand.

At this point, and following a rant I read elsewhere on the Internet, I should point out that if you are Roman Catholic, you may be offended by the portrayal of the church in this series, but it is fiction, it`s set in the future, and it`s a world where vampires exist. There are probably more important things to be writing to your MP about.

Actually, the vampires are an interesting aspect of the show, and are far from the hard to kill bloodsuckers of yore that are often portrayed. These vampires are truly a rival race to humanity, and while the first two episodes underline the Vatican`s insistence that they are a plague to be fought, the final two episodes dispel that myth by introducing a rounded vampire character that shows that the two races can coexist. It will be interesting to see how the story pans out, but the intelligence of the writing makes Trinity Blood a compelling watch.

If there is one niggling aspect, it`s the imperviousness of the hero Abel Nightroad. He acts all goofy and amiable around the humans, but when he is faced with a vampire foe, he turns on the nanomachines in his blood, grows a pair of fangs and quickly despatches his antagonist with little or no effort. It`s the sort of invulnerability that can grow very dull, very quickly, but this is early days yet, and there will probably be a few foes that will cause him to raise a sweat. At this point the show is really going about setting up the premise and introducing the characters. This volume gives a good idea of the political landscape of the future; the various factions involved and introduces the characters. Abel is very much like Vash the Stampede, even if he is yet to manifest any personal demons. His sidekick Tres leads to some astounding animation, an android gunslinger that manifests the Gun Kata of Equilibrium, blowing away his enemies with abandon. We also meet Esther, the nun tainted with a need for vengeance in the final two episodes on this disc, who will play a greater part as the series progresses.

This first volume of Trinity Blood is a resoundingly positive start to the series, and I`m definitely looking forward to more. Hopefully the next volume will have fewer of the compression artefacts that show up a little too often on this disc, marring some astounding visual design.