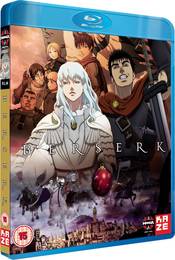 Review for Berserk: The Golden Age Arc 1 - The Egg Of The King Blu-Ray/DVD Combi

Just a few years ago, if you’d have asked me which anime I most wanted to see more of, the answer would have been a quick and simple Berserk. Berserk is my least favourite, favourite anime. That oxymoron status comes from two things, one is that it’s unfinished, and it stops in the most inconvenient, annoying cliff-hanger possible, mostly because the mangaka, Kentaro Miura is notoriously reticent in continuing the story. The second thing is that even for a 1997 TV anime series, it’s woefully low budget, with limited animation and low production values. Every time that I come to re-watch it, I’m reticent in placing a disc into the player because of its lack of visual finesse, but once I start watching it, I can’t stop until the final disc, so brilliant is its storytelling and its characterisation.

As I said, it just ends as the story kicks into gear; the whole 25 episode arc is really just a prelude to the main story, a prologue that sets up the supernatural tale. So when I first heard that they were going to make Berserk into a movie, I got really excited, as I thought that I’d finally get to see what happens next. My excitement only mounted when it became clear that one movie would actually be three movies.

Then the first bit of worrying news popped up, that the films used extensive CGI for the battle sequences, and that said CGI didn’t look all that impressive. The second bit of news was that these three films would animate the Golden Age Arc. The Golden Age Arc just happens to be the television anime story. It looks as if there will be nothing new for Berserk fans in these films in the way of story. Finally, when I heard about the run time for the films, especially this first film, I began scratching my head, as it’s worryingly short. I may have started out eager for more Berserk, but the more that I heard about this film adaptation, the less eager I became. Still, the first film is upon us now for UK home video release, and I get to look at the DVD Blu-ray combo of Berserk: The Golden Age Arc 1 – The Egg of the King, all 77 minutes of it (74 minutes on the PAL DVD).

Guts is a young mercenary looking to make a name for himself on the battlefield, and with his deft ability with his unfeasibly large sword, he certainly makes an impact early on, when he defeats a gargantuan colossus single-handedly. His skill and his relentless aggression capture the eye of Griffith, the leader of the mercenary Band of the Hawk, and Griffith just has to have Guts no matter what. It takes a one on one battle to convince Guts to join, much to the consternation of Griffith’s lieutenant Casca, who has never seen her Captain so enthused about anyone before. Three years later, The Band of the Hawk has risen in stature to be the vanguard in Midland’s war against the neighbouring nation of Chuder. What’s more, Griffith’s star is rising in the royal court of Midland, causing no little annoyance amongst the established nobility. But Griffith’s ambition is limitless, with a dark core that is symbolised by the arcane pendant he always wears around his neck. Guts and Casca have no choice but to follow their Captain down the path of a dark and supernatural prophecy.

Berserk gets a 2.35:1 widescreen transfer at 1080p resolution on what I would guess is a single layer Blu-ray disc. The DVD presents the film at 2.35:1 anamorphic widescreen. I watched the film on Blu-ray and found it to be a pretty pleasant transfer for the most part with one proviso. The image is clear and sharp, with strong colours, and there should be no problem regarding compression given the length of the film, and lack of extra content. Line detail is always clear, the animation comes across with fluidity and energy, and it all looks very watchable. The one proviso is digital banding. This is a 77 minute long film on a Blu-ray disc, yet there is banding, posterisation to a degree that you would expect on a DVD. Animation is commonly prone to such problems, and I’d expect to see it in large expanses of similar shade, but in Berserk, any scene which takes place in the dark is prone to banding, and I have to admit that it quickly began to distract me. Blu-ray should be better than this.

As for the animation itself, it all comes down to the CGI as I expected. Close up, the animation looks traditional 2D style, detailed and familiar. For the distance melee shots, the action switches to 3D CGI of the sort that you’d see in cut-scenes for medieval 3D strategy games, which in the mayhem of battle doesn’t really distract. It’s when in the action switches to middle distance, either in battle, or in quieter scenes, and the animators decide to go with CG instead of 2D that it looks wholly out of place. There are scenes of Casca, and most importantly Griffith, that look taken from a ten year old computer game, and they totally throw me out of the film. Otherwise, I found the world of Berserk in this movie to be presented as far too bright and shiny, all primary colours where the story needs shades of grey, dirt and grime, and darkness. Also, I’m not a fan of the re-imagined character designs. The original anime may have lacked for animation, but its character designs were convincing. Here Griffith is far too effeminate, Guts never loses his boyish looks, even though he grows up over 3 years, while Casca has been reduced to a cute girl, where in the original anime she had the muscle mass and body tone that was believable for a sword wielding mercenary.

The images used in this review are sourced from the PR, and aren’t necessarily representative of the final retail release.

The Blu-ray comes with DTS-HD MA 5.1 Surround English and Japanese, with translated English subtitles, while the DVD has DD 5.1 Surround English and Japanese, with subtitles and a signs only track (The only captions that need translating are a ‘3 years later’ in the middle of the film, and the director’s name at the end of the credits.) The surround is excellent, with full blooded action and grand cinematic music. The dialogue is clear throughout, and despite the cast changing, I was happy with the Japanese version. For fans of the English dub, it’s worth noting that the TV voice actors for Guts, Griffith and Casca, and some lesser characters reprise their roles, so there is a bit of continuity. There’s also a little continuity in Susumu Hirasawa providing the film’s theme song, although regular Bleach and Evangelion composer Shiro Sagisu composes the film’s score. He does manage to hold onto the essence of the TV series music though, which I thought was a nice touch.

Note that as per usual for Kazé releases, the Berserk movie DVD locks the audio and subtitle streams during playback, and there’s no way of watching the DVD with subs if you are a hard of hearing dub fan. In this case however, the same isn’t true for the Blu-ray. The subtitles are locked, but the audio is accessible via the remote. If you want to watch the English dub with a little subtitle help, choose the Japanese audio option, and switch the audio on your remote. Do the reverse if you want Japanese audio without subtitles. Incidentally, this film was released by Viz in the US, where they locked the subtitles and the audio on their Blu ray release.

Both discs autoplay with a trailer for the forthcoming Bleach: Hellverse movie, and present the film with animated menu screens. The film has a mere six chapters to it.

Berserk’s first movie has some great animation to it. If you can get past the clumsy CGI, and if you’ve never seen the TV series to compare and contrast the character designs, then you’ll be impressed by what the filmmakers have done with the action sequences, and the way that the battles have been choreographed. The one thing holding that TV series back was a lack of budget, and that became clear in its production values. It was a show that had to resort to the budget saving measures of lesser anime, the triple pans across static images to suggest action, shaking stills while inserting battle audio to emphasise impact. The Berserk movie has the money to show all the things that the series had to cheat us on, and it is a breathtaking cinematic experience, especially given the rarely used 2.35:1 scope in anime.

But that is all you’re going to get from this film, especially if you’ve seen the television series. This film adapts the first ten episodes or so, and squeezing about three hours of television narrative into 70 odd minutes of movie really does tell. A fair bit of the narrative is just cut out, and with it goes character development and depth. The same sort of thing happened with Fullmetal Alchemist Brotherhood’s first 13 episodes, which shared content with the first half of the original Full Metal Alchemist. Both that and the first Berserk movie are highlights packages, shorthand expositions for people that are familiar with the material.

Not only is that a problem for those that are familiar with the series, but for those who come to the film cold, they’ll miss out on all the essential character development that happens in the series. You just get four major sequences, the recruitment of Guts, the first battle, Nosferatu Zodd, and the assassination. Guts’ decision at that point is an emotional turning point, character crescendos for both him, and Griffith and Casca. In the TV anime the meaning of that decision resonates with the viewer because of the story that has happened to that point. The movie has a fraction of that impact, and that fraction is only because of the way the plot plays out is better animated in the film, not because of any emotional weight behind it.

Berserk’s first movie is pretty to look at, but it’s ultimately thin and unimpressive. That’s pretty much par for the course when it comes to remakes. I’d get the TV series for the story and the characters, and swap to the Blu-ray for the battle sequences. The second film, The Battle of Doldrey has a lot of ground to make up if it’s to impress, not least in presenting us with something new, which let’s face it this film does not, and also in making us care about and show interest in the characters. It needs a better story writer. Berserk: The Golden Age Arc 1 – The Egg of the King comes out on DVD, DVD/BD Combo, and DVD/BD Collector’s Edition, which I believe will have fancier packaging and a collector’s booklet.