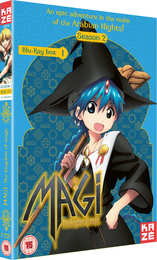 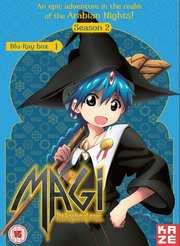 Synopsis:
In order to realize their objectives, the adventurers each embark on a new journey. Aladdin sets his sights on the land of Magnoshutatt to study magic while Alibaba travels to the Leam Empire to challenge the gladiators of the coliseum. Morgiana sets sail towards her homeland of Katarg, and Hakuryu returns to the Kou Empire...

Equipped with a charm to mask his powers as a Magi, Aladdin arrives in Magnoshutatt with another goal - to investigate this nation's relation with the Al-Tharmen - the power behind the "Abnormalities of the World."

Meanwhile, the royal family of the Kou Empire is in mourning for their Emperor's passing, and is shocked when the throne is passed on to someone they had not expected. An ominous cloud looms over the Empire as the flames of revenge burned within Hakuryu. The Magi of the Leam Empire, Scheherazade, also senses this threat from across the sea and grows concerned for her people.

Back in Magnoshutatt, Aladdin is hard at training at the academy when he meets Titus Alexius, a prodigy from Leam. But then Aladdin realizes that Titus is also equipped with the same charm that he has! What is Titus's true identity!?