Another New Distributor on the Block!
It’s been a couple of weeks since my last review roundup, and the news keeps coming in thick and fast. Last time I was getting a little moist at the thought of the resurrection of Elfen Lied and The Place Promised in Our Early Days courtesy of newcomers 101 Films, who will be dipping their toes into the anime market next year.

But a full on belly flop into the anime swimming pool comes courtesy of Andrew Partridge this week, formerly of Beez, and currently full-on anime handyman with fingers in Kazé, Scotland Loves Anime, and Anime on Demand pies. Last week was spent teasing the social networking sphere with hints about AllTheAnime and Anime Limited, new ventures starting up in 2013. Well it turns out that one of the things that they are related to is a new, as yet unnamed anime label due next year. Snippets of news have been trickling out over the last couple of days, and the first licence announcement will hit once 1000 Facebook followers have been reached. This much is confirmed... it will be released on Blu-ray, whatever it is.

News from Anime News Network, as well as an interview with Andrew Partridge.

At the time of writing, Manga Entertainment have been teasing on Twitter that they have four announcements including three new licenses to let loose on their podcast this evening. This space will fill with said announcements as soon as I’ve heard them.

Update: So here are the Manga announcements.

Horizon in the Middle of Nowhere Season 1 and 2 are coming here, with Season 1 around 1st July 2013.
Black Rock Shooter will be released subtitle only on 13th May in a Complete Series Collection.
Eureka Seven AO is coming to UK, with the release date to be confirmed.
And finally, Fullmetal Alchemist Brotherhood will be completed on Blu-ray at last, with Part 3 in April, Part 4 in May, and Part 5 in June. That June release date will also see a complete series Blu-ray Boxset for the show. The RRP for the final collections will be a tad lower than the first two at £29.99 each.

In overall Blu-ray good news, Manga have revealed that their inception costs for the medium are coming down, including more importantly the size of the initial print run. It was hard for them to sell 3000 copies of a Blu-ray disc, which led to many cancellations. Having fewer to sell is what makes Fullmetal Alchemist Brotherhood viable at last, and it also makes Blu-rays for Horizon in the Middle of Nowhere and Eureka Seven AO likely. 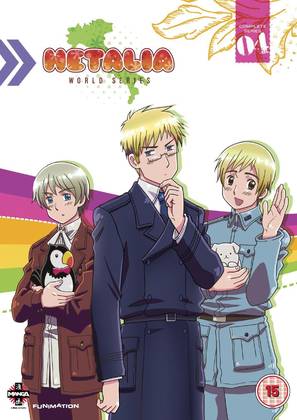 A bumper collection of reviews this time, just perfect to help you with your Christmas anime shopping, beginning with Hetalia World Series: Season 4. The personification of nationhood in short, sharp, comedy shocks continue, with what ought to have been the final instalment of this series. But in between volumes 3 and 4, they went and announced that they are making another series of Hetalia. That should please fans of this series with a singular wit (the series, not the fans). What should also please fans is that this release has more episodes than ever before, and more extra features, so much so that the DVD has to engage Tardis mode to fit it all in. 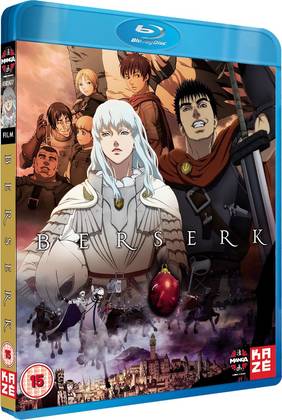 Next up I got to look at Berserk: The Golden Age Arc 1: The Egg of the King. If you’ve seen the original Berserk series, or indeed Kentaro Miura’s manga, you’ll know that this was one of the landmark series of the nineties (although the manga is still ongoing). It was the ultimate in testosterone filled action, blood, guts and sorcery in a medieval feudal setting. The original TV series that I watched may have been low on production values, but it still ranks as peerless when it comes to characterisation and storytelling. And it was just the prologue to the actual series, ending just when things got really interesting. Well, now the creators have got the money to do the story’s epic scope justice, and they’ve started again from the beginning, with three films that retell the prologue, the Golden Age Arc. I got to look at the first film on Blu-ray... 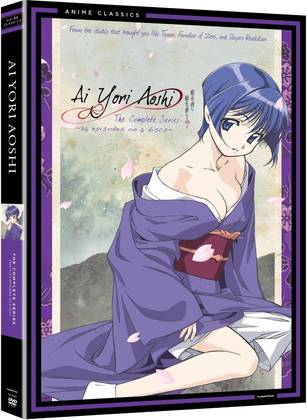 Next I got to look at a show that I have long wanted in my collection, but company failures, licence rescues, and packed release schedules means that it’s taken four years to come back to shop shelves. Time has moved on in the interim, and the passage of years hasn’t been that kind to the harem comedy genre of which Ai Yori Aoshi is nominally a member. This Classics Collection gathers it all into one compact boxset, the original series, the Enishi sequel, and the OVAs. Ten years after it was first released, can a show about a hapless teen male, living in a mansion surrounded by cute young girls who all adore him, still cut the mustard. Read my review of Ai Yori Aoshi: The Complete Series to find out. 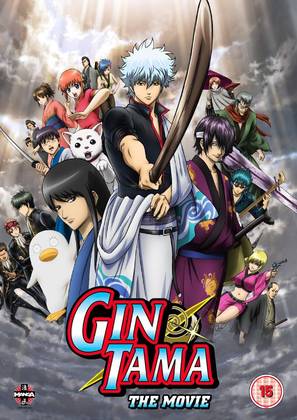 One of my favourite TV anime comedies... well one of my favourite legally streamed online anime comedies is Gintama. I’m halfway through its run on Crunchyroll right now, and it is invariably hilarious. Its anarchic humour, pop culture references, in jokes and running gags, and epic cast of zany characters are the best thing to ever emerge from the shonen action genre. It’s absolutely criminal that it remains a rare sight on DVD, while shelves strain with the likes of Dragon Ball, Naruto and Bleach. One small step towards rectifying that oversight is the release of the first Gintama feature film, based on one of the weaker arcs of the show. Weaker is a relative term though, as you’ll see by clicking on my review of Gintama: The Movie. 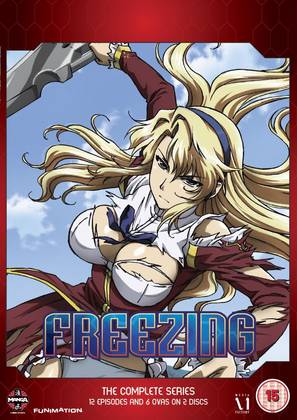 Finally I got to look at Freezing: The Complete Collection. It’s about girls with big tits, fighting amongst each other to the point of nudity over weedy teen males. And for the pretence of actual narrative, it rips off Evangelion. Okay, so I’m not a fan. Here’s what you do. Click on my review. If you look at the pictures first... buy the series. If you read the text first, don’t buy the series. Let your glands decide!

Hetalia World Series: Season 4 was released by Manga Entertainment last Monday, along with a complete collection. They release Freezing: The Complete Collection today, while Gintama the Movie and Berserk: The Golden Age Arc 1: The Egg of the King come out on Christmas Eve. Funimation re-released Ai Yori Aoshi: The Complete Series earlier this year, and that last one you’ll have to import from Region 1. Everything is DVD only aside from Berserk, which as well as a DVD release, also has a DVD/Blu-ray combo and a Collector’s Edition with booklet.