An Expo By Any Other Name Would Smell As Sweet

The weekend just past saw the MCM Comicon, formerly the MCM Expo take place at the Excel Centre in London, and as always the anime industry was well represented there. This time, the anime industry panel was split across two days. If you want to read more about the weekend, UK Anime Network has reports from Saturday and Sunday. Of course if all you want to know is what the new licence announcements are, then prepare for an annotated list...

MVM actually had the lion’s share of announcements on Saturday. New to the UK are...

Heaven’s Memo Pad is a very interesting looking show, while I have been looking forward to Shangri-La for some years now, having consistently hovered over the import button since its first home video release in the US.

Next up were two licence rescues, shows which ADV began to release in the UK a few years ago, but were truncated due to the company’s collapse. We’ll now get to see...

...finally released in their entirety in the UK. And to round things up, MVM announced that they have re-licensed...

Daphne In The Brilliant Blue

... for the UK, a previous MVM title whose licence had lapsed. All except Shangri La will be released in 2013.

As so often happens with Manga Entertainment, Amazon managed to rain on their parade by listing their new licenses for pre-order. Fans had already spotted...

...before Manga could officially announce them, but they did manage to keep schtum on their biggest announcement of the weekend...

... although given that it is still airing in Japan, it may be as late as 2015 before we actually see it in the UK, depending on how long it takes for Funimation to dub it and release it in the US. Finally, Manga clarified last week’s Blue Exorcist news. It will be released on Blu-ray later this year in two parts, and the new Blu-ray will have the English dub as well as the Japanese audio. The subtitle only DVDs will also be re-released, most likely as a complete series collection. Manga Entertainment say that the release of the dub on DVD is dependent on how well the Blu-rays sell. The cynic in me would suggest that if you want the dub on DVD, you may as well shell out extra for Aniplex’s forthcoming mega-expensive US release. Other news included Parts 5-8 of One Piece being licensed, waiting on Funimation for further UK Fairy Tail releases, and a potential Complete Dragon Ball Z collection for Christmas. Kazé weren’t there...

This is the first Tiger & Bunny movie, adapted from the series currently being released by Kazé Entertainment.

A new release this week is the Drifters of the Dead edition of High School of the Dead, the zombie fan-service mash-up that has turned out to be quite the fan favourite. The difference in the Drifters of the Dead Edition is the addition of the Drifters of the Dead OVA episode, added separately on sub only DVD to both Blu-ray and DVD releases of High School of the Dead. Previously, if you wanted to by the OVA at retail, your only option was the very reasonably priced re-release versions, complete with the series. That may be cheap, around £10 for both versions, but it isn't nice to the environment. If you already have the first release, and all you need is the OVA, your only option was to get it from Manga Entertainment at one of the summer conventions. Well now, hikkikomori have a choice too, as UP1 have the exclusive right to sell the disc from their mail order site, complete with pervy packaging artwork 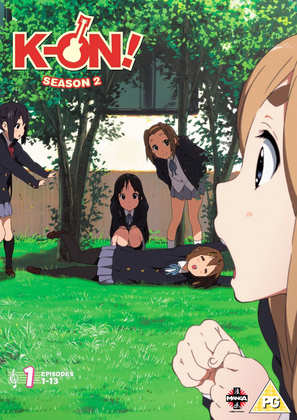 Three reviews for you this week, although I am sort of playing catch-up at the moment. To be honest, I was unsure that we would ever get any more K-On in the UK, following the apparently lacklustre performance of the season 1 single volumes, and the absence of the Blu-rays. But this summer sees the release of the K-On feature film and there’s no point in releasing that if the second series isn’t out. Which is why Manga are building up to the feature film with the second series, and this time it’s coming out as sensible half season releases. I took a look at K-On!! Season 2 Part 1, the first thirteen episodes, and was instantly transported back to a world of light music and cuteness. 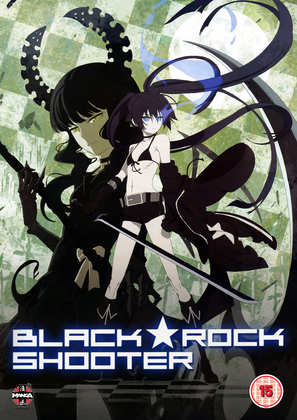 Then it was the turn of Black Rock Shooter, another late arrival, and another show featuring school girls. Not so cute and light though; instead we turn up the angst and the isolation as adolescent girls try and fail at interpersonal relationships, resulting in almighty battles to the death in a parallel world. To think, it is all inspired by a piece of artwork, and a pop song from a digital diva. 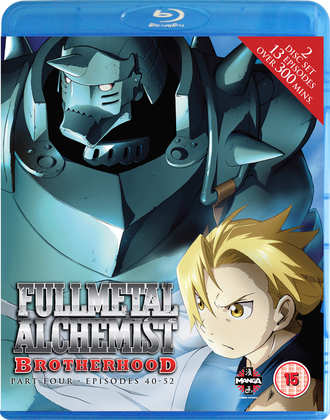 Finally it was the turn of Fullmetal Alchemist Brotherhood Part 4 on Blu-ray. Brotherhood on DVD was amazing, on Blu-ray it is even better. The story may be the same, it’s still the exquisitely plotted fantasy drama, with great characters, and awesome action, but there is something about watching it in pristine HD form that somehow elevates it even more. It might be the vivid colours, the lossless audio, the correct progressive frame rate, or it might just be the glee at watching this show on an even bigger screen. It makes you want to use the DVDs for skeet shooting.

K-On!! Season 2 Part 1 came out on DVD last Monday, 20th May. Black Rock Shooter was released on DVD on the 13th. Fullmetal Alchemist Brotherhood Part 4’s Blu-ray comes out today, and all of it is courtesy of Manga Entertainment.