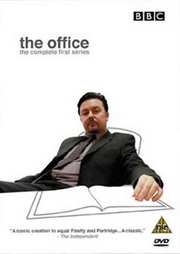 Review of Office, The Series One
added by
RWB
Places to Buy

Front Cover of Office, The Series One
Related Items

Review of Office, The Series One

Occasionally a comedy is made which is unlike any before it. It has humour, as one would expect, but it also has no shame. Add embarrassment and pain in equally big measures and you might get an idea of what to expect. The humour comes from the well-observed environment and the characters, and this is where The Office comes in. Based in a grey non-descript office on a dreary Slough trading estate, we follow David Brent and his band of unhappy office workers in paper-merchants, Wernham Hogg.

In the first episode we`re introduced to David Brent, the inept manager and with him is the anally retentive TA (Territorial Army Andy McNab wannabe) Gareth, Dawn the receptionist, Tim the put upon bored sales rep, and Ricky the temp. Redundancies are needed in a cost cutting exercise and David is forced by Head Office to look into it. This storyline is carried through all six episodes with many other things added such as a sexually attractive female coming board, a pub quiz, lots of flirting, health & safety training, Tim`s birthday and email abuse. There are plenty of other characters too that are just there adding to the look and feel of the whole thing. That it works as well as it does is a testament to the creative writing duo of Ricky Gervais (David Brent) and Stephen Merchant.

All hail The Office!

Presented with a 1.78:1 widescreen enhanced video transfer The Office looks very, very good. Shot on digital video, I couldn`t spot any flaws anywhere. Colours and detail are well reproduced too and it represents staid office life to a tee.

The series is dialogue driven so there are no demands on a full surround soundtrack. What we get in the Dolby Digital 2.0 sound is perfectly fine for this office-based comedy. Dialogue is retained in the front and it remains clear.

Easy to navigate menus with series one on disc one and the extras on disc two. The extras here are good but I would have loved to have seen/heard audio commentary from the writers, directors or cast on at least one episode. That would have been the icing!

• Documentary (39:18) - Talking heads with writers/directors Ricky Gervais and Stephen Merchant as well as cast members Mackenzie Crook (Gareth), Martin Freeman (Tim) and Lucy Davis (Dawn). This is a good extra as it covers outtakes, the writing of the series and is a bit silly too. It`s a joy to watch. Widescreen enhanced.

• Deleted Scenes - There are six scenes with a quick onscreen reason from Gervais and Merchant as to why these scenes were deleted. All in all a good selection of widescreen enhanced deleted scenes.

The Office 2-disc set comes packaged in a slim keep case. There are English subtitles on the extras and in the main programme.

This first series of The Office is fantastic. While this comedy doesn`t have regular plot or punch lines, it manages to be cringe worthy in its realistic depiction of an inept and ineffectual management style. Ricky Gervais as David Brent is someone most of us can relate to at one time in our lives, and seeing him here feels all the more real with the documentary style of filmmaking on show. His character`s insensitivity, poor jokes and general tomfoolery are embarrassing and painful to watch; yet we want to see more. Watching how he deals with those that work for him is one of the moments where you avert your eyes.

It`s not just Gervais` portrayal of the manager, but his assistant, Team Leader Gareth Keenan is just like someone we know too. All the petty arguments, the so-called `management speak`, the difficult work related issues and all the jibes and the atmosphere created from the smallest details too, just work effectively. You only have to see things such as the stapler in jelly and the arguments that ensue to know what you`re letting yourself in for! All the acting here is spot on and the series is deserving of its BAFTA television award. It`s good to know that the UK isn`t the only country that`s enjoying this either. At the time of writing Series One is being shown on BBC America and from all accounts is doing well there as well as the rest of Europe. This brand of mismanagement isn`t the sole preserve of the UK.

The only thing that I can think of these six episodes is just that, it`s only six episodes and I want more! The Office is a nightmare, so go and see it and re-live all those painful office memories. This DVD is re-watchable so it comes heartily recommended.