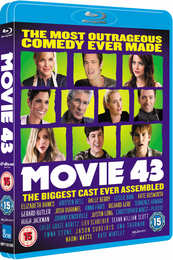 eOne have announced the release of allegedly outrageous comedy Movie 43 for 24th June on both DVD and Blu-ray.

The DVD includes a deleted short and trailer as extras, whilst the Blu-ray contains the same plus an alternative cut labelled The Pitch. For once, both carry a recommended retail price of £17.99!

Three daring teenagers journey into the darkest corners of the internet in search of the world’s most banned film Movie 43 and encounter a series of gloriously offensive videos along the way, each becoming more and more uproarious as they tentatively venture into the unknown!

From ‘The Catch’ where Kate Winslet stars as a woman on a blind date with the ever-so charming Hugh Jackman, who is by all description perfect. He’s talented, immensely handsome, successful in his career and has shown a lot of balls for a man on a first date. Quite literally so!

To ‘Veronica’, where Emma Stone and Kieran Culkin star as former lovers who’s final farewell swiftly turns into a sexual discussion and humorous lament over their relationship with topics including HPV and fingers up the bum, the teenagers can only dare to imagine what the mystical Movie 43 will behold and what the consequences of watching it will be!